The Burnaby Mirror part 2 … THE HAIKU THAT BOUGHT A HOUSE

It wasn’t strictly a haiku, but who’s counting anyway?

I had to come up with something right now! I’d just walked into a shoe store … this was my first go at selling advertising.

I’d just started work for The Burnaby Mirror, a newspaper nobody had every seen. Burnaby, British Columbia didn’t have a newspaper at the time.

Not for lack of effort, however, on the part of many a would-be media mogul. They’d come to Burnaby regularly, all fired-up with enthusiasm and optimism. But it didn’t take too long until they found out they’d wandered into the newspaper burial ground of Canada.

Trouble was, Burnaby didn’t want to be Burnaby. Only the bravest of souls would even mention that they lived there. That was primarily due to what wasn’t there … and what was there was just across the city’s borders.

To its south lay to Vancouver, precious metropolitan jewel of Canada’s Pacific Coast; to its north lay New Westminster, busiest port on the mighty Fraser River; to its west, just across the 2nd Narrows Bridge, lay the prosperous enclaves of North and West Vancouver.

Squeezed in between was Burnaby, a city without a center; a city consisting of homes of people who worked elsewhere; a city with no shopping center and no downtown; a city with two major arterials running through it and not much else, along which were strung small retail shops (long past their “best by” date) trying to survive, like lonely hitch-hikers trying to thumb a ride on a busy interstate.

No doubt about it … it was going to be a tough crowd to sell newspaper ads to!

And, if that wasn’t enough, to increase the level of difficulty the Mirror’s publisher was a slick-talking newcomer from Toronto whom nobody knew or had ever heard of, and its editor was a female impersonator who would tour the coast from time to time as a fan dancer (he was an affable fellow, big in a Scottish sort of way, a good reporter and an excellent gossip columnist).

This situation obviously called for ingenuity. It called for something like poetry, ssomething that could, in a matter of seconds, conjure positive thoughts and emotions from prospective advertisers.

Whatever sales pitch I used, I knew it couldn’t have anything to do with civic pride. That would be like trying to set soggy leaves on fire. If you were going to sell ads to Burnaby merchants, appealing to civic pride wouldn’t cut it.

Two words they least wanted to hear were “new” and “newspaper”

Nor would the words “new newspaper.” That was a phrase they’d heard once too often. And to have the gall to interrupt their day … one filled with more problems than hours … saying something inane, like “I represent The Burnaby Mirror and just wanted to introduce myself” would be kind of like saying “I represent malaria and just wanted to get to know you.”

Nope. When I walked into that shop and approached that older man standing behind the counter eyeing me warily, I knew I had to come up with something better than the old “get acquainted” pitch, something much, much better, and something right away!

Earlier that day I’d just completed my one and only fifteen minute newspaper advertising training session given by my new boss, the publisher, Gord Dancey (I represented his entire sales crew).

His instructions went something like this: We’re going to publish 15,000 newspapers a week starting next week (fact check … actual press run closer to 500). Here’s a layout sheet, a ruler and a rate card.

We charge for ads by the column inch, meaning “x” columns wide multiplied by “y” inches high. The bigger the ad the lower the column inch rate … even lower if they promise to advertise regularly.

And best of all, you get a percent of the money from all the ads you sell! It’s called your commission! Welcome to the world of advertising son.

That was it. No pep talks. No bull. No sales pitch. Just a ruler, a layout sheet, a rate card and the door. But it didn’t deter me or diminish my enthusiasm one iota. After all, I was entering the world of advertising!

But that romantic world I’d entered seemed a little less glamorous as I started walking down the block with my ad kit in my briefcase to call on strangers who ran businesses that had seen their heydays in the 1950s. 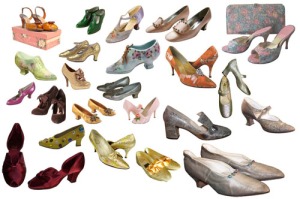 There were shoes everywhere!

First up, the small shoe shop. I looked ’round for inspiration. Then I saw it!

In an instant, with considerable help from Calliope, muse of poetry, I had it! A haiku-like sales pitch that worked so astonishingly well that after a couple of years it enabled me to buy a house!

“HI!” I said boldly, walking up to the fellow with an ear-to-ear grin masking my face, “I represent 30,000 feet. Some of those feet need shoes and I can bring them here.”

That was it. Despite the bemused look the guy was giving me, I knew he felt that I might not be an interruption at all, but rather an answer. After all, he had shoes to sell, and if this crazy young salesman with his shiny new briefcase could help him do it, by God he’d give him a listen!

As may be expected, he asked, “Yeah? Well how you gonna do that?”

But Calliope hadn’t deserted me quite yet. “I don’t quite know, because I don’t know enough about your business? How long you been here?”

Did he close the deal? Read The Burnaby Mirror, part 3!

Then it was off to the races. I knew once you get a guy talking about their favorite subject, themselves, you could get all the information you needed to make the sale. Or so I thought.

Was I right? Read Finding my way … The Burnaby Mirror, part 3, WHERE THE HAIKU LED

Disclaimer: this was a snapshot in time, long gone now. Today Burnaby’s a thriving, integral part of the Lower Mainland, filled with commerce and warm, gentle inhabitants … who love hockey and beer!

I hope you'll find my posts entertaining, occasionally edifying and worth whatever time you can spend with them ... Joe
View all posts by Joe Illing →
This entry was posted in How To Sell A Newspaper Subscription To A Blind Man, The Burnaby Mirror. Bookmark the permalink.