Lost in LaLaLand, part 4 … THE PALISADES AND THE PINK CADILLAC

It was an endless loop of … door cracks open, “Oh no, no, we have landscapers who do that” door slams shut.

The only luck we had in those initial door-to-door solicitations came when some pre-schoolers answered a door. I asked them get us some bread. This sounded like an excellent adventure to them so they scurried off to the kitchen.

And we almost got some until their maid, a rather large, stern-looking black lady, in a white maid’s uniform, heard the ruckus and immediately put a kibosh on the whole thing.

We were close to calling the entire landscaper scheme off when I hit on the winner … boyish charm and sympathy!

This discovery was both improvisational and inspirational. I asked an older lady, who’d taken appropriate precautions by hiding behind her barely cracked-open door, if she had any lawn mowing or landscaping work for me and my friend Jorge, who stood on the sidewalk watching from a safe distance.

No, no, we have landscapers who do that

“Oh no, no, we have landscapers who do that” she replied.

But, as our teenage bodies demanded sustenance, I blurted-out before she could slam the door, “Well then, mam, do you have any food you could give us?”

The door opened again, this time a bit wider, “What? Food? Did you say you want food?”

Perhaps this approach wouldn’t elicit the same response today as it did in 1959. LA and the world have changed. Back then we saw no wandering or discarded kids … none. We also saw few if any Hispanics, documented or otherwise. If you travel there today you’ll marvel at the progress Angelenos have made in both of those areas.

The matron continued, her voice softening considerably, “Oh my … food? Did you say you need food? Well you just wait right there honey. Just wait.”

Jim and I waited, and waited, lounging on her well manicured lawn. After what seemed like a very long time I started to get suspicious. I figured maybe we should get the hell out of there as she might’ve called the police!

But just before we bailed, the door opened again and there she stood, a friendly old lady holding two large sacks filled with food!

As Jorge and I sat on a bus  bench feasting on sandwiches, soft drinks and candy, I exclaimed, “Wow! That was whole lot easier than mowing lawns!”

With that, we immediately abandoned our previous strategy and replaced it with one more likely to succeed … one that worked so well we only used it once more!

That once more occurred a short while later in the afternoon. Per our new modus operandi I first asked for work … “No, no, no. We have people who do that!” … then food … “What! You need food? Oh you poor child!”

Our prospect was a middle-aged woman with unruly blonde hair in a jumbo-sized contemporary home with a pink Cadillac in the drive. She grabbed us, drug us inside and started feeding us immediately. It simply wouldn’t have done to tell her that we’d just eaten, so we feasted again!

While we ate this gal got busy! She was a virtual whirlwind! She started calling friends, all of whom wanted to help (or at least come by for a look at the two young wayfarers). Jim and I sat back watching this wonder woman in action, trying to digest our 2nd big lunch of the day when, much to our chagrin, she actually gave us some work!

Her pink Cadillac was scheduled for servicing and waxing, so she decided she could pay us  to wax it, rather than her garage … which was fine in theory, but in actual practice … 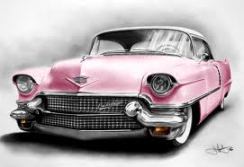 Problem was, neither Jorge nor I knew the first thing about cars and even less about waxing them.

She parked the chrome beast on her emerald green lawn where we managed to do a credible job of washing it. However, as it sat naked under an intense afternoon sun, the Turtle Wax we applied quickly turned into a thick, crusty skin that resisted our every effort to remove it.

When we finally gave up, the pink Caddy had become streaky white, requiring professional help if it were to ever regain its former beauty. It was an unmitigated disaster!

However, while Jim and I were distressed at the outcome, the lady of the house took it in stride. “Oh well, it’s my fault for parking it there,” was about all she said, though I thought I detected a bit of false bravado in her mea culpa.

While we were transforming her Caddy the lady had busily collected an assortment of food, utensils, blankets and pillows for us. Had we not talked our way out of the place, we were afraid she and her friends might even adopt us!

As we were leaving, thanking her and her friends profusely, and apologizing for our appalling work on her pink-now-white Caddy, she gave us an envelop with $20 in it. That doesn’t sound like much, but in today’s dollars its somewhere between $180 and $200! Not bad for a hour or so of “work.”

Feeling sassy and wealthy, it was off to the beach again

And so we ended our day in the Palisades … silently thanking Dino for his timely tip … carrying armloads of loot back to Jim’s coupe, after which we headed for one last visit to the sparkling sandy beach of Santa Monica and a few rides on its gaudy pier.

Next … What kind of music did the boys face at home and at school? What did they learn, if anything? Find out in Lost in LaLaLand, Part 5 … THE COSA NOSTRA CONNECTION AND TIME TO FACE THE MUSIC, coming soon!

I HOPE YOU ENJOYED THIS POST. IF SO, WHY NOT CONSIDER SHARING IT WITH YOUR FRIENDS? AND, IF YOU DON’T WANT TO MISS ANY NEW EPISODES, SIMPLY CLICK ON THE “FOLLOW” BUTTON ON THE RIGHT OF THIS PAGE … PRIVACY ASSURED

I hope you'll find my posts entertaining, occasionally edifying and worth whatever time you can spend with them ... Joe
View all posts by Joe Illing →
This entry was posted in Lost in LaLaLand. Bookmark the permalink.