How I Won The Cold War, Part 6 … PATIENCE, A LOT OF LUCK, AND MAGICAL KOBLENZ! 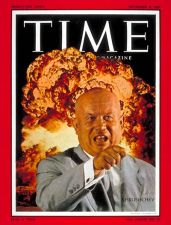 In September of 1964 I embarked for Europe in order to defend the West against the Soviet Union, headed by First Secretary, Nikita Khrushchev!

Perhaps it was pure coincidence, but concurrent with my arrival in October of 1964, the Soviets ousted Comrade Nikita and replaced Khrushchev with Comrade Leonid Brezhnev. Considering the secrecy surrounding that nefarious regime we’ll probably never know whether or not my coming represented a tipping point of some sort, but for whatever reason, the commies sure got mighty twitchy that month!

Years ago a friend was quoted as saying “That Joe has a horseshoe up his butt!” Perhaps my day of embarkation to Bremerhaven, Germany confirmed that characterization .

I’d flown to Fort Dix, New Jersey the day before, billeted overnight and, bright and early the next morning I was bused to a large warehouse at the Brooklyn Navy Yard. Along with a small contingent from Fort Gordon I had to wait in a back corner of the cold, dark, damp building while a couple of thousand soldiers and military families boarded a ship that would soon weigh anchor for Europe!

With the other signal corps boys, I waited, sitting or laying on my duffle bag for the entire, boring day … chilled through and through. I watched as a steady stream of soldiers walked up the steep gangplank to the ship’s lower deck while I waited and groused and bitched and whined about the whole lousy system. Why did everybody else get to board first … damn ’em all!

Finally, just as the last dozen or so sad GIs ascended the gangplank, the sergeants who assigned soldiers to KP or guard duty (for the entire cruise) serendipitously filled their duty rosters. Consequently they had nothing for me to do at all.

Nothing that is but watch movies, play the piano, munch on snacks, read and nap, lounge on deck, watch dolphins and whales and the small birds that flew between the ships plying the Atlantic’s sea lanes; or lay in a pile of duffle bags packed so high I could sink between them into absolute isolation and comfort; or just lean against a deck rail late afternoon, and watch the sun slip into a rolling horizon while breathing the salt sea air that felt fresh and cool against my face.

All and all I had an unexpectedly memorable, pleasant and enjoyable cruise … you might even say my twelve days of constipation made it even more memorable!

That particular malady was the result of a trauma I experienced on my first visit to the ship’s head. I entered that  large, unimaginably squalid room greeted by a sight that, try as I might, I haven’t been able to exorcize to this day!

The place was littered with supine or bent-over wretching seasick soldiers in an ankle high putrid lake, the stench of which would stop a charging grizzly in its tracks!

Although my lucky streak of avoiding chores such as KP or guard duty continued from basic right on through an ocean cruise (which took 3 days longer than usual … the navy needed to practice rescue maneuvers at sea, exacerbating the pain of those who’d not avoided them), it all apparently came to an abrupt end when we docked in Germany! 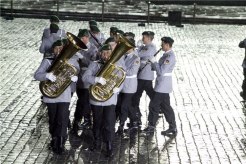 Rain, wind and a military band greeted us on the pier. However none of us wanted to return the favor by venturing up on deck to listen! The sailors though, had begun cleaning the ship, which meant either stand in the rain or help clean!

This resulted in mass confusion! Sergeants were grabbing soldiers throwing buckets and mops, while they scurried like rats to avoid it.

In spite of my best scurrying, my luck ran out! A beefy hand grabbed me from behind. The sergeant to whom it belonged drug me into an entryway, “You guard this space, private, and don’t let anyone in!”

It was a warm, dry spot, with wide, windowed doors through which I could even hear the band, that is before a crowd of rain-soaked-soldier-faces pressed up against the windows, begging to be let in.

Of course, under strict orders not to do so, I had to enjoy the comparatively luxurious space all by my lonesome, much to the chagrin of those boys freezing on deck. It was then that I thought long and hard about the situation and concluded that what might appear at first to be bad luck, just might be good luck in disguise!

This all seemed like an auspicious beginning to my tenure in the European Theater I thought. Had I know how good it’d get from that point forward I would’ve been dizzied by excitement!

After disembarking in Bremerhaven, I boarded a train bound for my new duty station … the 16th Signal Battalion in the Schloss Kaserne (castle barracks), Butzbach, a small, ancient Hessen city about 20 miles north of Frankfurt.

No military band to greet me there, just a long wait in a long line leading to a personnel specialist surrounded by a mountain of files (no computers back then).

After this fellow took an inordinate amount of time examining the my file, he finally looked up, “You know, I’ve been doing this for a long time soldier and I’ve never seen anything like this,” he remarked, “Never!”

Unsettled, I shifted my stance back and forth while trying to make sense of that, wondering just what it was in my file that surprised him so.

“Yeah?” was my lame, uncertain response.

“Yeah! Look!” he exclaimed, turning the file around. “See there?” he said pointing to a bar graph, “These are your scores from the tests you took at Ord.”

“Yeah?” I repeated, looking at the dozen or so bars on the graph.

I examined vertical black bars stacked along a horizontal axis.

In a low, confidential tone the clerk said, “I’ve never seen anything like this before! You’re well above the 90th percentile in each and every damn one of them! All of them! From mechanical to mathematical to linguistic … all of them! I’ve never seen that before!”

“Yeah?” the I repeated, mystified and trying to figure out where my jack-of-all-trades-master-of-none anomaly would lead.

“Yeah!” he declared as he wrote something in my file. He looked up with a broad, friendly smile and said, “Koblenz!“

I had no idea what Koblenz meant, but I soon learned that the word had a special quality to it, one that quickly quelled the harassment newcomers were subjected to by the more senior members of the kaserne’s garrison.

They’d shout “short!” in your face (meaning they had but few days remaining until they went back stateside), or yell “I smell seagulls!” (their clever way of indicating they detected fresh scents from one’s recent Atlantic crossing). Following this welcome ritual they’d inquire about assignments. When I’d say Koblenz, they’d stick their chin out, say “You lucky son-of-a-bitch!” and turn away.

A couple of days later I saw Koblenz for the first time. I’d traversed the 70 miles between it and Butzbach in the back of a three-quarter ton truck. This Fall trek was more like an arctic experience for a California boy who’d never even seen snow fall or puddles turn to ice. By the time I arrived, I felt I could’ve eaten ice cubes to warm up!

But these physical discomforts disappeared when I stuck my head out of the back of the truck. I drew a sharp breath and marveled at Koblenz and its surroundings … the name given it by Julius Caesar who fortified its invaluable strategic location lying at the confluence of the Rhine and Mosel rivers.

Countless conquerors had marched through since, from Charlemagne to Napolean to Eisenhower … not to mention the tourists who made it the most visited spot in Europe in the 1960s. In many ways Koblenz could be said to sit at the crossroads of Europe.

She’s definitely not a Koblenz girl!

Craning my neck I tried to see everything! I devoured every sight in my new hometown. The steep cliffs of the Rhine Valley … the barges working on the mighty Rhine itself … the complexity and beauty of its built environment … and most especially the style and sophistication of its shapely young ladies!

All of it absolutely floored me … especially those women! I’d grossly mistaken German womanhood. I’d expected them to be more like characters from a Wagnerian opera, but boy! was I wrong! Those girls were anything but valkyrie! They were beautiful, stunning and I wanted to meet them all, right away, each and every one!

Coming next! How I Won The Cold War, Part 7 … THIS IS ARMY LIFE?

2 Responses to How I Won The Cold War, Part 6 … PATIENCE, A LOT OF LUCK, AND MAGICAL KOBLENZ!