How I Won The Cold War, Part 8 … THE KAISER’S COOK 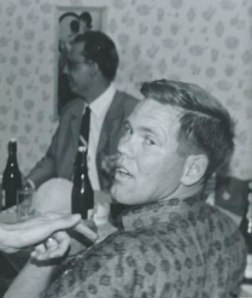 Pete had a real fondness for German Pilsner

We were detached from our army and attached to the Third German Corps of the German Bundeswehr.

Tall, fit and ornery, Pete looked like a modern-day Erick the Red. He was quick to anger, quick to forgive, fond of beautiful women (his wife was drop-dead gorgeous), liked to drink and had what can only be called vision … a gift to look ahead and see things clearly (unless it happened at cocktail hour or later).

You could call him a born leader … which is exactly what all of his men called him, along with a sincere, out-sized affection. They loved him, and would follow him anywhere, without reservation.

Pete was a military anomaly. More entrepreneurial than army, he thrived … and his genius blossomed in the freedom his Koblenz domain gave him.

He set up an exchange with a local baker, trading “surplus” army flour for 6-days-a-week, early morning delivery of oven-fresh, warm bread and brochens …  the tastiest I’ve ever eaten! He kept things between us and our Bundeswehr hosts well-oiled and hassle free.

He organized festive parties with our German military brethren … barbecues and feasts on every 4th of July and Thanksgiving. These were sacred highlights of the detachment’s social calendar … well-attended and filled with goodwill, women and plenty of free liquor! Wives, daughters and girlfriends were welcomed with open arms!

He forged relationships with the civilian community, important in that our kasern was small and located smack dab in the middle of a bustling, prosperous city. We participated in activities like a 9 pin bowling league (fun, fun, fun … a far different game from our 10 pin variety, great sport with weekly games awash in beer, followed by ox tail soup … um, umm, ummm!) and community basketball games (we were all a bit surprised to find our sport so popular in Europe).

Pete also made sure to invite the two local US Army and Air Force generals who served as liasons with the Bundeswehr 3rd Korps to as many of our activities as possible (mindful that many were not appropriate for general officers’ reputations)…. after all, you never knew when you might need some reserve firepower, especially considering Pete’s freewheeling ways.

He also held our happiness or misery in the palm of his hands. He was our Saint Pete standing at the pearly gates, welcoming pilgrims into paradise or directing them to eternal perdition, which would naturally make that dreadful fate all the more bitter after a taste of Koblenz heaven.

After I arrived in Koblenz Sgt Peterson assigned me to a duty station atop Hill 530, a tall peak in the steep banks that lined the Rhein that, logically enough, stood 530 meters above the town of Boppard in a small village called Fleckertshöhe.

Aside from a few modest pig and cattle farms, the village boosted an inn called Gasthaus Fleckertshöhe. This modest place had comfortable rooms and a large, well-known restaurant with a nationally famous, ancient chef (he owned the place) who’d once served as Kaiser Wilhelm’s personal chef.

The fare was outstanding and as were the scenic vistas … after all, we sat atop a UNESCO World Heritage Site, the sixty-five mile stretch of Rhein River valley with mountain-goat-steep slopes covered with grape vines and castles strategically located along the river so as to provide their former occupants maximum “taxation” opportunities and enforcement efficiencies.

Our detachment’s mission was simple. Keep the radio link between the Bundeswehr brass in Koblenz and those of the US Seventh Army on-air and “5 by.” We worked in shifts of twelve hours on and 36 off in a cargo-container sized crate on the back of a two-and-a-halfton truck. Its trailer carried two gas generators that we alternated every four hours (the noise must have driven some of the locals nuts, but I guess that kind of unpleasantness is the price you pay in a cold war scenario).

Locals from Koblenz, Boppard and environs would flock to the gasthaus during winter ski season … their skiing pretty much consisted of bunny slopes. And when there wasn’t snow they’d come to hike. On weekends you could find on every rock, behind every tree and under every bush getting back to nature … they’re a very outdoorsy bunch!

To say we were living the life of Riley while at the same time saving Western Civilization would be an understatement. We slept, read and ate during our shifts, and used our three-quarter ton truck to drive into Koblenz to partake of its enticing nighttime entertainments. We ate exquisitely, got plenty of fresh air and had more than enough money with which to enjoy the warm gemütlichkeit of our German hosts.

We had it made … almost. 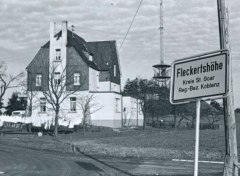 My home away from home … and a catastrophe waiting to happen

As the saying goes, there’s always a fly in the ointment! Our fly in Fleckershöhe was a buck sergeant (an E-5, the second lowest rank in the army’s enlisted officer hierarchy) from Texas who was in charge of our duty station.

While I became close friends quickly with the other two privates serving in Fleckertshöhe … Rudy and Lumpkins … I never could figure-out our sergeant. We were tragically complete opposites in just about every respect. The result … a most inopportune personality clash … one that I couldn’t resolve, try as I might. And to make matters explosively tenuous, he was my roommate!

Coming next! How I Won The Cold War, Part 9 … A SUCKER PUNCH AND A PRAYER

4 Responses to How I Won The Cold War, Part 8 … THE KAISER’S COOK