Yeah, but how about your street smarts?

Sergeant Pete Peterson, our senior “commanding officer” at the Koblenz Detachment, was a hard-drinking, loud-laughing, rule-breaking man’s man whose street smarts were right up there with Einstein’s math smarts!

Innovative, thoughtful, well-spoken and wily, he could sense danger, or opportunity, and jump on either without hesitation. But sometimes his drinking would get in the way of what you’d call top noch judgement, such as when our detachment mistakenly received war alert orders.

Our mission was to accompany our kaserne hosts, the Bundeswehr III Korps, into battle. But since they were getting ready for bed, not an apocalypse approaching from the east, we infered we’d probably not face any Commie tanks headed out of Czechoslovakia that night … but orders were orders, and we of the 16th Signal Battalion, Koblenz Detachment, got ready!

And we got ready for war! and ready for more drinking! … dancing! … or damned near anything else you could name! it all sounded like great fun! 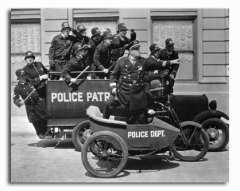 Martial madness ruled our small corner of the kaserne! We got ourselves armed and we were raring to go! We’d grabbed our M-16 rifles (fortunately without ammo) and assembled our convoy, which consisted of:  3 ea. two and a half ton trucks with mounted radio vans, 3 ea. trailers, 6 ea. power generators, accessories, cables, 15 ea. five gallon gas cans; 1 ea. jeep, 6+ cases of beer (in case of drawn-out combat), and 12 ea. (give or take a few) Koblenz Detachment Signal Corpsmen!

By the time Staff Sergeant Peterson arrived to bring some sanity to what had become a Keystone Cops war production, it was too late!

Pete, a born leader, was loved by all his men. He had that key personality trait that all natural leaders seem to possess … an honest concern for his men. He listened, really listened, and he led … and never more so than when he was into his cups!

That night Pete had been partying with friends when the news of the company alert reached him. He understood instinctively that some newbie company clerk at HQ had contacted us in error, but the rumors of a convoy disturbed him enough to come have a look for himself.

When he saw what we’d been doing, he lost it … and his heart went out to us. There we were, a bunch of wet-behind-the-ears kids ready to head out and fight for our home and country! Something about it inspired him and filled him with so much passionate pride that he pulled out in his new Mercury Cougar to lead the convoy out of Boelcke Kaserne.

We hit the road east for about five blocks until we came to some athletic fields. We parked our convoy, and marched with our M-16 rifles, into a commodious neighborhood gasthaus where a dozen or so customers were eating, drinking and enjoying life in general.

Our entrance had to be a sight to behold! The astonished looks on the faces of the customers proved it! I’m sure some of the Germans must have come close to apoplexy, flashing back to 1945 when General Patton’s 3rd Army marched through Koblenz. Regardless, all of ’em were stunned and trying hard to figure out what in the hell was going on and why they hadn’t heard about it!

However, when they did hear from Sgt. Peterson (fluent in German) how he couldn’t let all our preparations to meet the Russians in mortal combat go in vain, they soon realized our noble intentions and joined us in a joyous spirit of camaraderie, buying us round after round of drinks, singing, sharing stories of the war and inviting friends to come share in the fun!

The place was a madhouse soon enough … and we all had a ball, at least I’m pretty sure we did! My last memories of the evening were of sitting under the bar with the proprietor’s wife, somehow entangled in her blouse … but beyond that it’s a complete blank.

We were “three sheets to the wind” when we entered the Gasthaus, but by the time we exited we were fully rigged sailing to a nasty hangover!

Don’t panic folks! We only came for a beer!

But a hangover wasn’t the worst of it. Next morning, Pete showed up with the perfect outline of a telephone pole pressed in the center of his new Cougar’s grill! But, as he put it, “That’s what insurance is for.”

Surely events like the alert bonded us to Pete. How could they not? He was always looking out for us, and never more so than when he decided to build a bar for us!

Our own private bar!

Wow! Maybe he thought it would help keep us off the roads (good idea), or maybe he just always wanted to own a bar and saw an opportunity for a classy commercial-grade joint and jumped on it!

Naturally, doing so would violate all army regulations known to man, but, on the other hand, we did have a vacant upstairs room that could easily accommodate forty or 50 people. And it did have large, double-window dormers that looked out over the city towards the Rhein River. And we did have a large, vault-like room next to it (originally meant to store top secret material) that was spacious enough to warehouse a vast quantity of beer! And furthermore, it was adjacent to our private movie theater!

It was a natural! And a totally brilliant idea, but after all it did come from Sgt. Peterson himself, a fount of wisdom … a man of vision … a dreamer, a schemer, our sergeant first class!

Coming next! How I Won The Cold War, Part 17 … SERGEANT PETERSON BUILDS A BAR AND SGT. MURPHY DISAPPEARS

I hope you'll find my posts entertaining, occasionally edifying and worth whatever time you can spend with them ... Joe
View all posts by Joe Illing →
Gallery | This entry was posted in How I Won the Cold War. Bookmark the permalink.