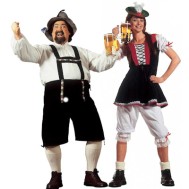 When Germans start drinking … watch out!

You never know when they might start singing a song about their hat that has three corners. Or, start dancing in circles (in a very loose interpretation of a Polka) while boisterously singing nonsense lyrics like “Humba Humba Humba!”

And watch out for fun ’cause there’s plenty of that too! It’s of a good natured variety, and can go on for quite interminable lengths. It takes a most accomplished drinker to keep up with them!

Sergeant Peterson could not only keep up with, but even surpass some of the most experienced of German drinkers … and start all over again the very next day! Of course his liver begged for a rest, but unfortunately Pete wouldn’t listen … he just loved to socialize! And you never knew what his gregarious propensities might stir up. Once it even stirred up our own private bar!

Our benefactor, the King of Koblenz beers

A chance meeting with the head of the Königsbacher brewery in Koblenz resulted in a scheme to supply and construct a bar for us. It was an offer Pete just couldn’t refuse!

Of course we were just a handful of GIs, but opening a bar inside Boelcke Kaserne … well that made all the difference!

Pete, never one to analyze an opportunity so long as to miss it, jumped on the deal. After all, we had a vacant room upstairs plenty big enough for a bar, and an adjoining, mostly unused, crypto (top secret) room that could hold enough beer for weeks … and of course he had to take into consideration our esprit de corps! The guys would love it!

And boy oh boy did we ever!

When finished, our bar was, quite simply, perfect! In our minds it ranked right up there with the Long Bar at Raffles in Singapore, or Harry’s Bar in Venice, or any watering hole anywhere for that matter.

And it was OURS, ALL OURS!

It had a proper bar complete with sink and running water and a hundred or so Königsbacher beer glasses. The bar itself could seat a dozen or so on its padded, leather bar stools, and the scattered small tables (with linen table cloths) could accommodate another twenty or more quite comfortably.

We also had games like shuffleboard and fussball, and a large, secure locker for whiskey, vodka, gin and the like. Large dormer windows let in plenty of light in during the day, and provided vistas of the city at night.

We also had a spacious private movie theater across the hall playing five new Hollywood feature films a week … and that was before video tapes, DVDs and the like. Oh, and there was ping pong too.

I guess life always has its privileged few. Of course it also has its wheel of fortune that’s constantly turning. Nobody alive really has to be told that, but sometimes it’s good to reflect on it, especially when that wheel has spun you to its crest. After all, you’ve got to assume it’ll keep on spinning, in which case you’ve nowhere to go but down.

But for the moment in Koblenz, we were riding high … and we knew it! We kept our bar immaculately clean! Every morning a work detail scrubbed it, making it look like the first class place we all wanted it to be. Why we even went to great lengths to actually frame the Playboy Playmates displayed on its walls!

I guess that esprit de corps thing was working!

Come on in! Grab a beer! Make youself at home!

Like so much else, the bar presented another opportunity for me in my constant fight against boredom during work hours … which instantly promoted me to bar manager (it helped that nobody else wanted the job).

And so with enthusiasm,  vigor and a complete lack of knowledge, I invented a system of accounting unique in the world of bar management … an honor system. Non-hosted guests paid for their booze by giving cash to one of us residents, who then put the cash along with a tally of the drinks consumed into a cash box.

Detachment soldiers or weekend guests (e.g. the Brits from Berlin … more about that later), simply kept a running tally of their beers or drinks on a steno pad laying on the bar. They settled-up at the end of their weekend, or at the end of each month when I’d collect balances due, pay the brewery and leave the “profit” in a drawer in my desk.

No age or sex discrimination allowed in our bar!

Of course I knew even less about accounting (especially of double entry systems) than about running a bar … so I just keep running totals of individual accounts, making corrections or reconciliation adjustments as the need arose.

Granted it represented an extremely loose, unorthodox way of running a bar, but it worked. We never had a dispute about the bar or its books … and we kept accumulating profits, a situation that required a creative solution … so I figured I’d spend it on us!

I’d give each departing detachment member an attractive, tasteful, bespoke German beer stein decorated with their name, date of service, Koblenz logo, German eagle, and a naked lady who glowed iridescently through the bottom of the stein when it was emptied (the area around Koblenz had world renowned clay and stein manufacturers, one of whom I contracted with to make these beautiful, porcelain steins for us).

Of course they’d also get a traditional, personally engraved Zippo cigarette lighter … and, as if that weren’t enough, I’d throw a grand farewell party in their honor!

The drinks for these parties were special orders. In that I did all the ordering and would get on different jags from time to time, the booze at the parties could vary greatly. For example, take Sgt. Murphy’s departure. Sure it was a debacle, but it was surely the most enjoyable debacle of them all! It was the perfect storm!

Sgt. Murphy’s party was just getting good when Murphy (above right) disappeared!

I was on a champagne kick at the time, and Murphy, upon whom champagne had mysterious and perplexing effects, was leaving for Vietnam.

Sgt. Murphy had more friends than a dog has fleas, so consequently his party was a monster, a real monster! I ordered scores of cases of Sekt (German sparkling wine), which, when mixed with beer proved an explosive concoction for our party’s “champagne sensitive” honoree!

As he’d married a Koblenz girl plenty of strangers attended (i.e. Mrs. Sgt. Murphy’s friends and family), along with dozens of his Bundeswehr colleagues!

Everything was going swimmingly well, until, about halfway through the party we discovered Sgt. Murphy had disappeared. Actually, it was Mrs. Sgt. Murphy who first noticed his absence, but nevertheless, when we heard he’d gone missing, we knew it had to be due to champagne!

We went on full alert! We discovered he was last seen speeding out of the kaserne in his VW for places unknown. We sent search parties to likely downtown bars and hangouts, but no Murphy could be found.

It started to get late, and still no Murphy. Mrs. Sgt. Murphy was frenzied, furious and really pissed off! Sgt. Peterson had gone home. All the search parties had returned empty handed (naturally after for a few obligatory beers). W’de hit a dead end, but we kept partying nonetheless, confident we’d soon get a break in our missing persons case. 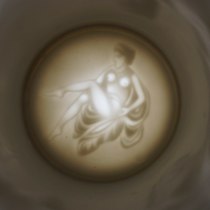 The Rhein Maiden who resides at the bottom of my one-of-a-kind stein!

Finally we received the phone call. It was from a dance hall about ten miles up the Mosel River. Seems they had an unruly, partying American soldier on their hands!

Ah ha! Murphy! We jumped in our vehicles and headed up the Mosel, mach schnell. Sure enough, it was Murphy, happy as hooker when the fleet’s in, dancing, singing and having the time of his life!

Naturally, we didn’t want to ruin our good buddy’s good time, especially since he was headed for the jungles of Southeast Asia! So we joined in! And so did the hundred or so patrons!

What could have been a disaster soon turned into one hell of a night thanks to the magic of champaign! By the time we left the proprietor had completely flipped from plaintiff to participant and had the band play vaious patriotic American hits, like This Land Is Your Land, The Battle of New Orleans, California Girls and the like.

After that unforgettable night, we never saw or heard of Sgt. Murphy again … I guess that’s the army way. Oh, and Mrs. Sgt. Murphy? She never came near the kaserne or spoke to any of us again, which we all found somewhat rude. After all, we’d given the Murphy’s a party the like of which I’m sure they never had again!

Coming next! How I Won The Cold War, Part 18 … ALERT! ALERT! THE COLONEL’S COMING TO BUST PETE!

I hope you'll find my posts entertaining, occasionally edifying and worth whatever time you can spend with them ... Joe
View all posts by Joe Illing →
Gallery | This entry was posted in How I Won the Cold War. Bookmark the permalink.

2 Responses to How I Won The Cold War, Part 17 … SERGEANT PETERSON BUILDS A BAR AND SGT. MURPHY GOES AWOL