You boys fancy going into town for a beer later?

Too much rum can lead to trouble … big trouble! I learned that simple fact when, after returning to the barracks late one day, and in a hurry to “catch up” with my buddies, I finished four-fifths of a fifth of Bacardi in about an hour … big mistake!

I’d gotten back from my BK run and by the time I noticed how much I’d drunk, I was a goner. The rum was starting to take control.

I’d been really into politics since my days in Franklin Junior High in Vallejo, California … but in Koblenz I first experienced a physical, gut level reaction to something that had offended my political sensitivities. And it all had to do with France and one tall Gaul who at the time fancied himself as ruler of a revived Carolingian empire. He was le grand Charles de Gaulle!

De Gaulle was a proud and brave man … a true French chauvinist of towering stature (6’5″) with a backbone as straight as a flag pole. He’d led the Free French Forces during WWII, after which he pretended that France was still one of the four big powers in the world … just like it had been before the war.

The other big powers acceded to this fancy and pretended not to notice that France was flat on its back with a global empire that it could no longer support or effectively govern. They accordingly gave-in to the majestic deGaulle and accepted France as a co-equal partner in the occupation and control of the ruins of a starving Germany. And so it was that Koblenz fell within the sector granted to the French.

Charles de Gaulle, the greatest Frenchman of the twentieth century … according to Charles himself

After receiving that gift from the US, Britain and the Soviet Union … other major powers … de Gaulle tried desperately to convince the rest of world that France truly was one of the world’s great powers, and all of his countrymen that he and he alone could resurrect the glories of France.

To this end he developed and stockpiled a bunch of nuclear weapons and bombers, and christened it his force de frappe, which loosely translated meant “don’t mess with us or you’ll regret it!”

With true Gallic imperiousness, he believed this force de frappe gave him a better poker hand than it actually had. When he demanded that the US relinquish its leadership of NATO and give others, most notably the French, co-equal roles, the US laid down its cards and de Gaulle looked a Royal Flush!

As a consequence, like the kid who stubbed his toe and wanted to cry but couldn’t because he was too old to cry, le grand Charles withdrew France from NATO … and kicked all the remaining bits of the US military out of France! He was grandstanding on the world stage and using GIs as props in his game … and that’s what really rubbed me the wrong way.

Koblenz hosted about ten thousand French soldiers at the time. They rarely came into town as they could hardly afford the bus fare, much less a beer … the French treated their conscripts worse than dogs, and paid them less! Only lifers, such as members of the French Foreign Legion, had enough money to enjoy an occasional visit to downtown, and then only to Altstadt, the older, seedier part of town where ladies of the night worked in cheap bars and sleazy dance halls.

Terpsichorean delights, among others, awaited les Légionnaires in town

The Légionnaires’ favorite hang-out in Altstadt was a large bar and dance hall. They pretty much kept to themselves, probably a wise move as relations between the French and Germans were historically dicey, especially in Koblenz, with which the two races had played ping-pong for centuries (the French still spelled it Coblence).

In any event, les Légionnaires were a tough bunch, not too talkative but not unfriendly either. Still, they were French, and as such, representatives of that devil de Gaulle!

That was enough for me … that is, for the rum stirring up the politics in me! As we were shooting the bull I started ruminating on the injustice of it all, the utter ingratitude of it! … and that’s when upon it hit! I decided this was personal … and I sure in hell wasn’t going to take a geopolitical insult like that lying down!

I jumped up and headed out … fast. My buddies, aware that another foolish scheme had taken shape in my cranium, tried to accompany me … but I wasn’t interested in their company! Nope, this was personal!

In order to divert them I threw an entire potato chip display rack from a corner store in their path … I had no idea where it’s come which gave me pause and confirmed to me that my rum tank was filled to spilling over the brim! While my buddies dealt with the irate store owner who was waving his arms as if fighting off a swarm of bees, I ran on full bore towards Altstadt.

Say! Are you French?

The road leading to there crossed a bridge that spanned fifteen or so electrified railroad tracks. The bridge required traffic to take a bit of a detour … however there was this wooden catwalk strung above the tracks that I’d always eyed as a more direct route to town, a shortcut you might say.

Sure it wasn’t safe … why else would they have string so much barbed wire around it? And sure the catwalk didn’t have handrails … but maybe, just maybe if you just ran over it fast without thinking about it too much … so like a complete idiot I jumped the fence and sprinted across the catwalk to the utter horror of my friends who could just stand and watch Illing’s last race!

But I made it! Altstadt was mine!

I made it to the Légionnaires hangout in no time at all. I burst through the swinging front doors like John Wayne in an old Western. I pushed my way to the middle of the dance floor. I threw up my arms and yelled at the top of my lungs, “STOP THE MUSIC! STOP THE G*D DAMNED MUSIC!”

The music stopped. The dancers backed away from me like big ripples in a little pond. I slowly executed a 360° turn like a ringmaster in some kind of psycho circus. I was looking for a Frenchman! And I found plenty of them! They were all around me, eying me with puzzled looks, as if to say, “Who this crazy f**k? This Yankee fool! What thinks he that he wishes from us?” 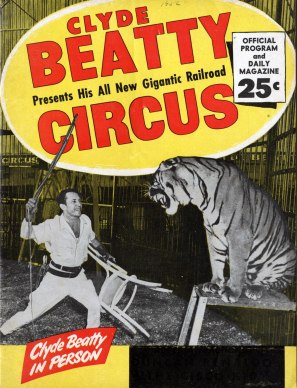 Watch out for my “force de frappe” Clyde!

I stopped turning. It made equilibrium chancy. I figured it was now or never so I shouted out,“DeGaulle is an ASS! And all Frenchmen are f**king slimy FROGS!”

“Come on down! I’ll fight all of you right here! Right now! One at a time, or all at once! It makes no difference to me at all!” I shouted as I assumed the stance of a sumo wrestler.

It was quiet. Dead quiet. I was exposed, alone on the deserted dance floor, surrounded by tables and booths on the ascending floor levels that ringed the smoke-filled dance floor. The lights were dim. I could make out red dots in the smoke … cigarettes smoked by the Légionnaires trying to figure out what exactly was going on.

I crouched like a wild animal in Clyde Beatty’s Bring-em-back-alive Show! And with my last intelligible thought I realized that my rum-fueled political revenge had all of a sudden made the absurd look perfectly rational!

That’s when, just in the nick of time, my buddies came running in. They stopped dead in their tracks, trying to make sense of the scene that greeted them, but forgoing comprehension, rushed to the dance floor anyway and tackled me.

They apologized profusely to the patrons, employees and free-lancers while dragging me out as I screamed and shouted profanities about de Gaulle and the frogs and the p***y Légionnaires!

I’m told I danced-up a storm that night at the Black Bottom … that is until the guys tossed me like a rag doll in the back of a cab with instructions to take me to the Boelcke Kaserne quick, and under no circumstances go to Altstadt!

Afterwards I felt better politically … cleansed in a way. I’d confronted le grand de Gaulle’s force de frappe and didn’t live to regret … in the least! However, the hangover? That was truly a regret … a prodigious regret!

Coming next! How I Won The Cold War, Part 27 … THE LIFER LOSES AN EYE

I hope you'll find my posts entertaining, occasionally edifying and worth whatever time you choose to spend with them ... Joe
View all posts by Joe Illing →
Gallery | This entry was posted in How I Won the Cold War. Bookmark the permalink.

1 Response to How I Won The Cold War, Part 26 … A FLOCK OF FROGS AND A TALL GAUL