In the non–volunteer army of the 1960s, the term “lifer” (those who chose to serve for twenty years or more) had unsavory connotations, like crazed or weird or misanthrope … it sounded more like a prison sentence than it did a career.

But, when you got to know them, army lifers really weren’t all that bad … just a little different.

Lifers were usually sergeants or officers, and considering that all of them had it within their power to make your life absolutely miserable, you always tried your best to make nice with them.

And a lot of them made nice right back. Like Sergeant Kovacs, the mad Hungarian revolutionary who always had a big smile, a dislike of yelling and a head filled with so many incredibly flavorful, tasty culinary masterpieces that I can still taste them to this day, a full half-century later! Kovacs … The Hungarian Prince of Paprika!

Then there was Sergeant Murphy whose farewell party at our detachment’s bar touched him so deeply (along with a couple of bottles of champagne) that he went AWOL the night before heading to Vietnam, ending up in a dancehall on the Mosel … just about losing his wife in the process.

And of course the legendary Sergeant First Class Pete Peterson, a leader beloved by his men, admired by his many friends and deeply mistrusted by his superiors who always let Army Regulations and jealousy trump Pete’s entrepreneurial instincts.

On the opposite side of the lifer coin lay Sergeant Ivars Konitis, a tall, wavy-haired, ardent Latvian nationalist who harbored a serious vendetta against the Soviets, as well as a desperate need to prove himself. He also harbored a distrust of practically everyone … a combination that earned him the enmity and disdain of just about all of those he tried to lead.

But the strangest lifer of all was a guy called John, a Spec 4, one of us, a lowly enlisted guy who’d already gotten out of the army and, after a few years as a banker in Chicago, re-enlisted!

He acted normally enough most of the time, but occasionally suffered from fits of melancholy or distemper … like the time he started screaming and threw his expensive banker’s wristwatch out of his barracks window onto the street a couple of stories below.

The watch burst like a grenade into an assortment miniature springs, gears and whatnots, after which John continued to drink his whiskey as if nothing had happened. He never gave us a good reason why he chucked the watch, but I think it had something to do with completing his divorce from the world of commerce.

Time to say goodbye to banking

“Because it’s real! he’d say. “No corporate back-stabbing! No suits! No ties! No social climbing bull shit! And besides … you get to see the world!”

I had to agree with the seeing the world bit, but didn’t know much about the corporate stuff. However, when I pointed out that a place called Vietnam was part of seeing the world, a part that far too many of our friends were seeing at the time, John went silent.

But not to worry. We were safe in Koblenz. At least we thought we were safe … until a disastrous bout of gallantry on John’s part proved otherwise.

You might say he was a grab-bag of contradictions … an intelligent fellow, a reformed banker, an army lifer and a romantic without a woman. John was a puzzle that proved hard to figure-out and, as it turned out, a tragedy unfolding in slo-mo.

It all began at the upscale Club Continental (infamous for the assault by its waiters and assorted patrons on me and Jasko) where some deranged fellow was harassing a young lady non-stop. John watched quietly at first, but as the situation continued to escalate he found he couldn’t tolerate it any longer.

Motivated by equally compelling senses of justice and chivalry, John sprang into action. He confronted the fellow, inserting himself between him and the girl. Unfortunately the guy pulled out a small pistol and shot John in the face. 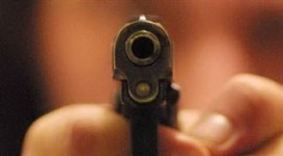 He pulled out a small pistol

Back at the kaserne we got the news around 2 am. Sergeant Kronitis dispatched me to the hospital to act a translator/liaison between the German doctors and US Army physicians in Frankfurt.

Upon my arrival, the German docs briefed me and impressed upon me the urgency of the situation, “The bullet entered his nose and exited through his eye. We can save the eye only if we operate now before it loses any more fluid! But we must begin immediately!”

At this point I got a call from an army colonel in Frankfurt. I relayed the diagnosis of the German docs, but to my surprise the colonel ordered me to stop them, “Don’t let them operate. We’re sending a helicopter for the victim. We’ve got to take care of him ourselves.”

When I told the Germans they shook their heads in disbelief. They found it incomprehensible, “We must operate immediately or he’ll lose his eye!”

I told that to the colonel again, but he stood resolute, “No. We must operate, not them. That’s final!”

The German docs were perplexed and disturbed. They’d come to me every fifteen minutes or so, “The eye is drying up. Where’s the helicopter? When is it coming?”

So where’s the helicopter colonel?

It didn’t. Weather conditions grounded it, but not until dawn and morning had passed. The colonel’s last call informed me that an ambulance from Frankfurt was coming for John … which was much too late to save his eye.

The whole affair was a classic army SNAFU (Situation Normal, All F****ed Up). I sat up all that night talking with, and trying to comfort John in a small room we shared with a guy who kept coughing up buckets of blood. I had no idea what ailed the fellow, but found our his proximity both distracting, disquieting and highly disturbing.

At several points during that evening I came within a whisker of ignoring the pigheaded colonel and giving the Germans the go-ahead to operate. However images of my court martial (this all happened before my promotion to sergeant) stopped me short.

To this day I feel guilty about it all. Just a simple “yes” could have saved John’s eye, not to mention the career of the only lifer among us enlisted grunts in Koblenz. But none of that was to be. Nor were we to hear from or about John ever again. It was as if  he’d never existed.

To this day I wonder what became of him. I wonder if he found another career or ended-up a homeless drunk sleeping under highway bridges? Of course I hope he recovered mentally as well as physically. But I can’t ignore the irony in it all … how fate can make a hash of things, and how quickly and unexpectedly life-changing events can visit us.

I suppose belief in a Supreme Power helps us through such times … and I sure hope it did for John, a likable lifer who lost everything in the blink of an eye.

Coming next! How I Won The Cold War, Part 28 … HERE’S TO THE LADIES