Driving Around Europe Without A Map, Part 7 … HOW DO YOU SPELL LENINGRAD? 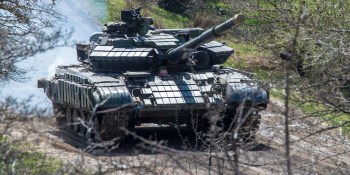 When I saw the Russian tanks surround me, I figured I’d taken the wrong turn.

This was one time a map would have been really useful! Immediately after clearing customs and launching my VW on Mother Russia’s soil as one of Intourist’s first visitors in that country’s first tourism campaign since the reign of the Czar, I asked the friendly custom’s inspector for a map … I sure didn’t want to get lost there!

“What? No road maps? None?” I replied, astonished.

“Oh brother! I thought, “this new tourism thing really isn’t quite up-to-speed yet.”

I was soon to see that this only served as an introductory metaphor for Soviet Communism’s fatal flaw, the one that ultimately caused its implosion a few decades later. You see, regardless of intentions, the sovereignty of their nation ended-up vesting in its vast bureaucracy (a particular gift of the Russians).

I couldn’t make heads, tails or any other body part out of their alphabet!

Communism, its monolithic political party, and the USSR’s legislative and administrative governing bodies were virtually one in the same. This insured that high positions in the party translated into high positions in the government’s bureaucracy, regardless of experience or ability … a sure-fire recipe for dysfunction!

“How am I going to find my way to Leningrad?” I implored. “I can’t read the signs! Heck, I can’t even recognize the letters!”

I tried make sense of the Cyrillic script on the signs, but the longer I stared the more confused I became.

“See her word how long?

“Da! Just follow word like that. Remember how long! That all!” he said flapping his arms at his side as if he’d just explained 2+2=4 to a moron.

I studied the word carefully, very carefully … then, having no good alternative, took off.

After driving a fair distance I came to a crossroads. I tried my darnest to remember the length of the word for Leningrad in order to measure it against all the other words on the directional sign … but they were all roughly the same length!

So I guessed …and I guessed wrong, which was how I found myself driving into the middle of some Soviet tanks playing war games somewhere on the way to Leningrad from Helsinki.

I flipped a u-turn as fast as I possibly could and scrambled down the hill I’d just driven-up, scolding myself all the while “It probably wasn’t a good idea to wear your US Army field jacket and put this camera with its telephoto lens on the passenger seat … nope, not a good idea at all YOU IDIOT!”

When I got back to the correct route, I first noted that in spite of so little traffic, I encountered a fair number of disabled vehicles on the side of the road.

I tried to calculate the percentage of broken down cars to my estimate of the vehicle population, but my math failed me. Whatever the percent, however, it was colossal compared to that of  the US or Germany.

I guessed that although the USSR ranked as a superpower among the world’s nations, they still hadn’t quite gotten the car-thing right … not to mention the truck-thing, for, whenever I drove-up behind a large truck I got ready to bank into a curve … but none appeared! 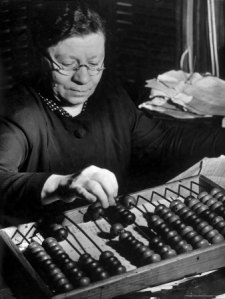 An optical illusion? Nope, not at all … the frames of the truck were built out-of-square so that they always appeared to be turning as they traveled in a straight line! I marveled at this, surprised at the Russian’s lack of manufacturing skill.

I also wondered how they could align the tires properly! They must have chewed through the rubber like carpenter ants nesting in soft wood!

Then there were the cash registers … that is, the complete absence of them! Cashiers would sit with a cash box and an abacus. That’s it. When you paid your bill she’d (they were all women) make those beads fly like hornets swarming around their nest!

The whole process was a mystery to me. I just paid whatever they asked for and moved on. However, it must have been a nightmare for an auditor. But then in the workers’ paradise, capital wasn’t really a priority, there was no need for auditors … just tax collectors.

In actual fact they had no such thing as an accounting profession. Factories would simply produce as many of whatever they made as fast as they could, count that total production as sales, and that was that! No grim-faced auditors to please, no fines to pay and no market disciplines to observe! Nothing to it! Just pay whatever taxes your higher-ups decreed, make as many widgets as you could and all was good  … until they eventually went bankrupt that is!

They pretend to pay us, we pretend to work … and drink plenty of vodka!

The service industry was different from that of the West too … and it was as much a mystery to me as it was to the Russians, principally because there was nothing that even came close to our concept of service, which was regarded as a form of labor, and thus a contradiction to a bedrock principal of communism … no individual should profit from another’s labor.

No one works for anyone else in the workers’ paradise. All workers work for the common good as decreed by the regional and national soviets, or councils, of the country.

A noble principal, and high-minded for sure. But it didn’t work-out too well at restaurants or shops, or with manufacturers or distributors, or with factory workers or farmers or … well, you name it, it just didn’t work well at all.

I saw this first-hand the first time I hit a restaurant for a snack. The server served me as if she were doing me a favor … and was none to quick about it. The kitchen crew cooked my order as if they were doing me a favor … with the same lack of enthusiasm and urgency. The bill came after the server noticed me sitting looking lonely all by myself, and the lady with the abacus interrupted a running conversation with a friend in order to fly through her beads faster than the human eye could follow. All in all it took about an hour and a half … and that was just for a snack!

As usual, Winston found the right words for it!

I had to wonder what marvels I’d encounter in Leningrad, the former Saint Petersburg, the seaport that Peter The Great built in order to transform Russia from a backwater into a world power!

There had to be something to it, after all, by 1967 the USSR reigned as one of the globe’s two superpowers. It could launch intercontinental ballistic missiles that carried civilization-destroying bombs with pinpoint accuracy. It could launch satellites into orbit around the earth, send humans into space and bring them back alive … despite its failure to do the more mundane things well, like build truck trailer frames square!

It was all quite puzzling, which is why Winston Churchill once put it this way, “Russia is a riddle, wrapped in a mystery, inside an enigma.”

Coming next! Driving Around Europe Without A Map, Part 8 … LOST AND FOUND THE MOSCOW CIRCUS

I hope you'll find my posts entertaining, occasionally edifying and worth whatever time you choose to spend with them ... Joe
View all posts by Joe Illing →
Gallery | This entry was posted in Driving Around Europe Without A Map. Bookmark the permalink.

1 Response to Driving Around Europe Without A Map, Part 7 … HOW DO YOU SPELL LENINGRAD?