Driving Around Europe Without A Map, Part 9 … RUSSIA AND RIGOLETTO

Sorry, closed for the duration!

The late afternoon sun turned gold and blessed everything it touched. It was the time of day when miracles happen and angels walk at our sides.

That’s when I saw the small brick chapel in what looked like a park … if you could call a land-locked patch of ground with no way of getting to it a park. Major city thoroughfares surrounded it. No crosswalks led to it.

I darted across the street inexorably drawn to it. It had this sublime beauty that kept pulling me … I guess you could call it enchantment.

Tall trees stood like sentinels around the chapel. A gentle summer breeze rustled them, sounding as if they were trying to whisper to me. It was the right time and the ideal setting for prayer and I couldn’t wait to go in for a spell.

However, as I drew near, a sight I’d never seen before confronted me, one I’ll never forget. The chapel was chained shut … and apparently had been for quite some time!

Chains, threaded through the chapel’s door handles, were fastened with a large, rusted padlock. It was ancient … as if the original Bolsheviks themselves clapped it on just after they’d conquered Saint Petersburg, changed its name to Leningrad and banned all religion.

They “freed” the working classes from the tyranny of religion. They promised an earthly paradise in its stead. No longer would those who labored for others be duped by their overlords and myths of heavenly beings who promised a better life after death.

No theological fairy tales for the common man! They were simply opiates that justified suffering. Communism was their paradise … and they could get it now! 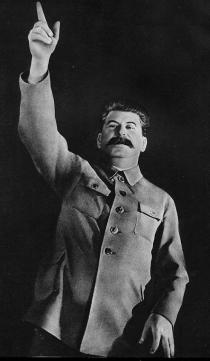 Unfortunately, as the great poet Burns once reminded us, the best laid plans of mice and men often go astray. Sadly, such was the case with Russia. The void created by the banishment of religion and the execution of the Czar and his family simply anointed The Supreme Soviet with ultimate power which eventually devolved to the control of a single man, a monster named Josef Stalin who was directly responsible for the slaughter of over twenty million Russians, and indirectly for the deaths of countless millions more.

As I stood on the chapel’s doorstep bathed in the golden light, I thought about religion and communism and humankind’s never-ending search for an Eden, a paradise where people live fulfilling lives in peace. I had to ask, “How could such beautiful dreams lead to such horrendous nightmares? How could one man kill so many millions?”

Of course that’s a puzzle that has no answer, but I came closer to an understanding of it after my visit to Moscow. I’d asked my hotel there for a map of the city, but they had none. They suggested that perhaps I’d like the complimentary services of an Intourist guide for the day.

“Why yes! Of course! That’s be great!” I responded enthusiastically, and within a short time I was introduced to Sofia, a redheaded graduate of the University of Moscow.

Ah Sofia, you definitely had a knack for political rhetoric!

Sofia and I spent most of the day together, visiting the university and many of the city’s notable sights. She was good looking, smart, articulate and spoke English beautifully … so well in fact that we engaged in a running debate about the differences between our two political systems.

By the end of our time together she’d explained the political architecture of the Soviet system. She pointed out how similar it was to ours, how its design protected its citizens … something I found hard to believe considering the purges and calamities committed by its leaders.

Whenever I mentioned a protection afforded the average American by our constitution, she’d reply, “Oh da! Da! Dat ve haf for us also!” describing a similar provision in their governing documents.

She painted quite a rosy picture of an orderly society where individuals were protected, laws respected and injustices cured. Had she been running for office I could have voted for her with a clear conscience!

But I realized that her words, though honeyed and comforting, were just words. History has a way of exposing such delusory, captivating rhetoric for what it is … a crock! You can dress a monster like Stalin in fine silk robes, but underneath he’s still nothing more than a stinking, pathological mass murderer!

It was a good lesson for me as it showed how easily rhetorical malpractice can justify the unjustifiable and whitewash the blackest of crimes … not to mention chain the doors of small chapels in the name of freedom.

Don’t believe everything you read!

It was a tragic period in the history of Russia but I quite enjoyed my time in the country where I personally witnessed no injustices, crooked cops or murders. The people were friendly and helpful, and the classical arts were alive … as I discovered to my everlasting pleasure in Leningrad!

At around five in the afternoon, after roaming around that lovely town for the day, I asked my hotel clerk if he’d heard of any events that night. He told me that the opera was performing Verdi’s Rigoletto.

He checked and after a bit found one for me for two bucks.

“It commences seven sharp!” he cautioned me as he handed me the ticket.

“Great! Super! Thanks!” I replied.

I arrived at the opera house a few minutes before seven. I followed an usher into one of the most elaborate, rococo venues I’ve ever seen. It was scene straight out a romantic version of the Czarist period, with filigrees of white on a field of sky-blue rising in concentric rings towards heaven itself.

It was breath-taking, indescribably beautiful! But as we walked in I wondered were I’d sit. The place was packed … but the usher accompanied me right down to an empty seat front row center. “Wow” I thought, “I’m sure glad these guys haven’t got this tourism thing quite figured out yet” … but felt a bit bad for whomever they’d bumped to accommodate me!

Wow! What a show they put on! I’ve never been so moved by music in my entire life. The performance was absolutely unforgettable … and somehow a fitting conclusion to my visit.

The opera tells the story of a man named Rigoletto who manipulates those around him in order to exact revenge upon an aristocrat who’s wronged him … but in so doing Rigloetto destroys the one thing most precious to him one earth, his daughter.

It’s analogous to the story of Russian communism, for in their efforts to build a workers’ paradise, its leaders slaughtered countless millions of innocents in a failed effort that led to the final implosion their Union of Soviet Socialist Republics.

After all was said and done, Mother Russia emerged a bankrupt and failed state. So much blood for empty promises and hollow rhetoric. So much suffering. So much pain. So much tragedy.

You’d think it was an opera.

Coming next! Driving Around Europe Without A Map, Part 10 … VIENNA, SALZBURG AND ROMEO’S MAGIC MAP

2 Responses to Driving Around Europe Without A Map, Part 9 … RUSSIA AND RIGOLETTO