Driving Around Europe Without A Map, Part 14 … SING MARTHA, SING!

You couldn’t call Martha not homely, but as she stood next to me in the lengthening rays of the mid-afternoon sun with a fierce wind blowing her hair back over her shoulders, I couldn’t help but think of that sprite called the Spirit of Ecstasy that graces the hood of Rolls Royce automobiles.

The motoring comparison was not wholly without merit since she was standing completely upright through the open sun roof of my VW at the time … a legendary car in its own right.

For value, convenience, reliability and price, there’s never been an equal to my 1965 VW, a miracle of automotive engineering. She never let me down … well almost never … regardless of how much I neglected her. She never complained or argued or tired me out no matter how long or hard I drove her. She sipped her gas like a miser counting his gold and had impeccable road manners. 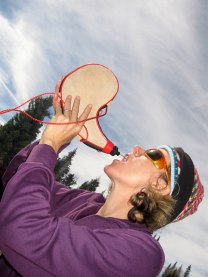 The boda bag, a canteen cleverly designed with wine in mind

Rolls Royce may have its ornamental Spirit of Ecstasy, but we four traveling companions, Martha, Stephen, Maria and I, personified it!

This was perhaps best exemplified by Martha’s selfless and generous stewardship of our boda bag … a devilishly ingenious canteen based on a sheep’s stomach that, when squeezed, emits a steady stream of liquid … in this case red wine … straight into a grateful imbiber’s mouth.

Martha had perfected a technique uniquely suited to our motoring environment that allowed her to squirt dry Italian red from the boda into our waiting mouths as lovingly as a mother feeding her fledglings.

Did I say that you wouldn’t call Martha not homely? I did, and in fact that was only half true, for Martha had what amounted to a split personality.

Most times you’d just kind of not look at her. You wouldn’t ignore her, you just really wouldn’t look at her either. But when she sang a miraculous metamorphose would occur right before your eyes! That’s when the other Martha appeared, the one you wouldn’t call not homely but rather beautiful!

MARTHA COULD SING AND SING BEAUTIFULLY! When she sang it captivated everyone within hearing like an Indian snake charmer playing his pungi. Beautiful! Incredible … almost like having Barbra Streisand sing on command!

As we drove I’d yell out, “Sing Martha! Sing!” and she’d unselfconsciously belt-out classic after classic from the Great American Songbook to the unabashed delight of Stephen, Maria and yours truly. Every aspect of her singing was sensational. 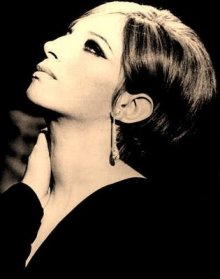 Martha had a voice to rival that of the great Barbra!

And both of the Martha’s came with a ready laugh. She had a big-hearted generosity,  gentleness and understanding about her, with an open, unafraid smile. There was nothing phony, fake or fatuous about her. And she was smart as a whip too … on summer break from UC Santa Barbara.

Stephen and Maria were exceptional too … he was on holiday from Oxford and she from Trinity College, Dublin. And best of all, we were all as compatible as H2 and O.

From the time we met in the hostel on the Isle of Capri, where Doug went off on his separate way to Tunisia and beyond, we all got along famously! We had no arguments, misunderstandings, secret agendas or conflicts. You could say we got along as harmoniously as a barbershop quartet, which would be at least half accurate considering Stephen carried a guitar with him everywhere.

He had a fair, assertive voice that generally found the right pitch, which combined with his enthusiasm, extensive repertoire of folk songs and an accomplished facility with the guitar brilliantly complemented Martha’s unexcelled vocal gifts. They made music a memorable part of our time on the road.

Ah, what a great pleasure it was to motor through Campania, Basilicata on the way to Brindisi and ferry to Greece with music in my ears and a belly full of wine!  All in all it was a deluxe and definitely a merry, if not entirely safe, mode of travel!

Coming next! Driving Around Europe Without A Map, Part 15 … MY PELOPONNESIAN DISASTER

3 Responses to Driving Around Europe Without A Map, Part 14 … SING MARTHA, SING!