Driving Around Europe Without A Map, Part 19 … AN ANCIENT ATHENIAN RITUAL

Stephen and I were ready for any contingency!

We snuck into the taverna as if we were on recon patrol. We moved slowly, cautiously sweeping our heads to spot any sign of danger and to take an inventory of exits … just in case.

It was night and we were in a low-low-rent, blue-collar waterfront neighborhood of Athens. The bar was filled with young men … sailors, stevedores and a miscellany of other macho types, the kind who make their way through life with muscle, endurance and frequent infusions of high-test alcohol.

Minus the jukebox and other twentieth century amenities, the taverna looked like it could have come straight out of Stevenson’s “Treasure Island.” Men sat bent over cafe tables like conspirators sharing dark secrets, or they sat on stools chatting and spinning worry beads* as if they were a part of their anatomy like fingers or toes.

There wasn’t a woman in sight. Not there, not then, not in that part of the world. Women didn’t go out after the sun went down … only working gals did that. 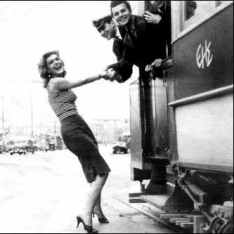 Good service and attention to detail makes ’em want to come back again and again!

We’d seen that in southern Italy and were aware of how, from a Greek point of view, that Martha and Maria’s presence could be unhappily misconstrued … which put me and Stephen in our twitchy recon mode.

Hunger drove us there. We were very, very hungry, and we were eating on twenty-five cents a day … a feat only possible if you didn’t mind going into back kitchens in the Greek equivalent of a slum. We’d point to whatever looked edible and chow down one-handed using the other to ward off fleets of dive-bombing flies.

The taverna looked safe enough. The owner greeted us with effusive hospitality and the locals seemed too absorbed in their conversations to care about some raggedy-ass foreigners and their strange ways.

And so we were lulled into a false sense of security until all hell broke loose! It erupted at a table right next to us. Chairs flew out from under their occupants like go-karts on nitro as a couple of seriously angry antagonists jumped up and stared at each other without blinking, their noses almost touching.

It’s a fine day for a dance!

Time in the taverna stood still. It was as silent as a tomb. The two men started circling each other, crouching like cats ready to spring.

Meanwhile the other taverna patrons cleared tables and chairs out of the way. We jumped out of the way too and wondering “What in the hell?”

The shorter of the two combatants, wearing white pants and some sort of nautical hat stamped a foot down like a sumo wrestler and inaugurated a ritual everyone in the place seemed familiar with … except us.

The fellow rushed to the juke box after which he grabbed a big shot glass filled with cheap booze, placed it in the center of the floor and stood over it.

Then, like a crane rising in a mating ritual, he slowly held his arms straight out with his hands hung loose and his fingers dangling like wind chimes in still air. When his arms reached shoulder height those hands snapped to life as in flamenco … and he started, ever so slowly, to dance.

And as he danced he went from lento to adagio to allegro and finally to presto. Like a kinetic artist performing an ancient ritual, he managed to gracefully express rage with sensitivity and even delicacy. He twisted his torso with the music while his shoulders remained immobile.

He circled the big shot glass in tighter and tighter circles until he was on top of it. He leaned down, bit its edge, clamped his jaw shut and without using his hands, lifted the glass up and back until he drained it. 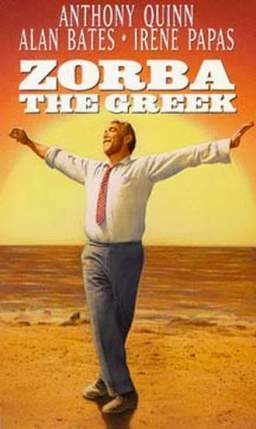 Dance Zorba … dance it all out!

The crowd chimed in with enthusiastic, boisterous encouragement and he placed the glass back on the floor, let out a fierce yell while giving it a karate chop that shattered it and severely lacerated his hand!

He stood up with blood spewing, wrapped his hand in a bar towel given him by the bartender who dutifully swept up the debris before shoving the tables and chairs back into place. After a few minutes, with the exception of the blood, you’d never guess anything much had happened.

Although the fellow needed emergency medical attention, he decided to finish drinking first and continued to throw back one handed shots.

None of us could think of a thing to say. This was way too far beyond our experience to comprehend. But later, when we did talk about it philosophically … in the birthplace of philosophy itself … the act took on a more sensible aspect.

After all, the misunderstanding that would have been settled with guns in Chicago, was settled with a minimal damage. And only one person got hurt, suffering a self-inflicted wound. The ritual took revenge out of the equation while flushing pent-up anger. As a bonus, with grit and a sizable lose of blood, a man gained a new measure of respect with his balletic display of Attican bravado.

However, in spite of all its positive aspects, I’ll confess that I’ve never considered using it to cure any frustration I’ve felt … no matter how angry I got!

Coming next! Driving Around Europe Without A Map, Part 20 … SERENDIPITY, THE UNEXPECTED GUEST

I hope you'll find my posts entertaining, occasionally edifying and worth whatever time you can spend with them ... Joe
View all posts by Joe Illing →
This entry was posted in Driving Around Europe Without A Map and tagged Athens Greece, Athens Greece 1967, Bar fight in Athens, Greece, on the road in 1967 Greece, Zorba dance. Bookmark the permalink.

2 Responses to Driving Around Europe Without A Map, Part 19 … AN ANCIENT ATHENIAN RITUAL