Driving Around Europe Without A Map, Part 21 … A MACEDONIAN MELEE 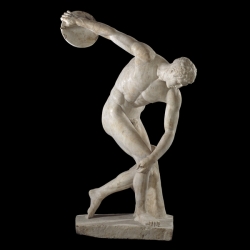 Getting ready to launch another plate

The plate crashed against the stone wall and splintered into shards that lay scattered on the clean swept earth floor.

We’d just settled-in at our table in a public house when that porcelain projectile flew just above our heads! We damn near jumped out of our skins!

Our nerves were a bit jittery to begin with considering the fact that all respectable women strictly avoided any kind of public exposure after the sun went down in that part of the world, in that remote village and in that place of ancient taboos.

The village was tiny, really just a public house surrounded by some small, primitive domiciles, livestock and a few lazy dogs. The inn looked okay from the outside, and pretty good inside. Its thick walls and large arched, open windows kept it nice and cool after a sizzling hot day, and accommodated a fair-sized number of patrons.

Adding to our jitters, some of the patrons didn’t inspire a great deal of confidence. Most of them looked like smugglers or some kind of outlaw or other. But after driving a hundred or so miles over deeply rutted Macedonian dirt roads that wound through a rugged, sparsely populated and economically impoverished countryside, the inn was as good as we were likely to find.

A most unusual awakening!

While the flying plate definitely got our attention no one else in the place even gave it a second glance! What?

All in all it was a fitting conclusion to an most unusual day. The morning was an omen of the mixed-bag day to follow.

The night before we’d pulled off the road … God only knows where … and thrown our sleeping bags near by my trusty VW for a good, long snooze. Sleeping until the sun had climbed a goodly way up in the morning sky I had a premonition that someone was watching me … you know, when you “feel” someone’s looking at you, that their eyes are boring into you .

It’s a creepy feeling, the kind that pops you eyes wide open during childhood nightmares. And when my eyes popped open, I saw a another set of eyeballs looking down at me … only about a foot away!

That’ll clear away the cobwebs quick! But all was well. The eyes were set in the somewhat astonished, but not unfriendly face of a young Macedonian teen who’d stumbled upon us sleeping in bags. He was simply trying to figure out who the hell we were and what the hell to make of it all.

He was probably fourteen or so, lanky, dressed appropriately for the hardscrabble life he led. There was something in the way he acted that dispelled any unease we may have felt, and after a few minutes of the exaggerated body movements and contorted body poses … the kind people use when they’re imperfectly communicating with someone without the benefit of a shared language … we followed him over a hill to his family’s farm.

It was a modest place in a stunning setting, and featured a hand-pumped well under a large, broad-leaved tree, to which the lad ran to station himself to pump water for us while we washed up. We didn’t see anyone else at the farm, but before we took off he gave us some fruit and cheese for the road. Lacking the word for thanks in Macedonian we continued to distort our bodies as best we could.

Later in the day we came upon a large, extended family on a plum picking outing. We jumped out to join them, but their happy generosity would not hear of it! They grabbed basket-fulls of their just-ripe, juicy specimens, giving us far more than too many … even stuffing a few dozen down my shirt!

In fact, the thought of slivovitz grew with each mile we drove that day. It reached its nadir in that public house of the flying plate in remote Macedonia. And when we’d walked in after driving for hours over rough roads, each of us brought a big thirst along with us. It was time to relax and enjoy … but the plate vs. wall collision put an end to all of that, instantly!

Coming next! Driving Around Europe Without A Map, Part 21 … THE UNEXPECTED FIESTA!

IF YOU DON’T WANT TO MISS ANY NEW POSTS, SIMPLY CLICK ON THE “FOLLOW” BUTTON ON THE RIGHT SIDE OF THIS PAGE. I HOPE YOU ENJOYED THIS POST. IF SO, WHY NOT CONSIDER SHARING IT WITH YOUR FRIENDS?

I hope you'll find my posts entertaining, occasionally edifying and worth whatever time you can spend with them ... Joe
View all posts by Joe Illing →
This entry was posted in Driving Around Europe Without A Map and tagged Greece, Greek village hospitality, on the road in 1967 Greece, road stories, singing on the road, VW stories. Bookmark the permalink.

3 Responses to Driving Around Europe Without A Map, Part 21 … A MACEDONIAN MELEE