Driving Around Europe Without A Map, Part 24 … MAD MIDGET MUSLIMS AND A CLOSE ENCOUNTER WITH ZEITGEIST 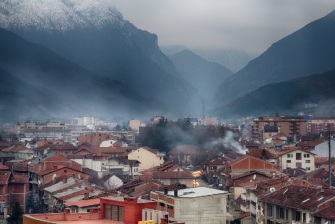 We knew we’d be hitting a city soon. The paved road gave it away. Whenever we hit it we’d hit a city soon afterwards. The longer the stretch of asphalt, the bigger the city. And this was the biggest we’d hit in quite a while … it was called Peć.

It’s Kosovo’s fourth largest city. It lies close to Montenegro’s border high in the jagged Rugova Mountains. And though we rejoiced in the change from bouncy dirt to easy-riding asphalt, we found ourselves in a traffic jam … one unlike any any of us had ever experienced before.

It was market day and an unbroken train of equine powered wagons processed before us, plodding their way to town. We passed them carefully, but as there was no other motorized traffic, we had the on-coming lane all to ourselves. We rolled by cart after cart filled to overflowing with produce, fowl and cottage goods, and entire families dressed peasant style sitting on top of it all.

They looked at us as suspiciously, as if wondering, “Who are these strangers? Why do they come here? They’re not merchants! What are they after? What do they want?” 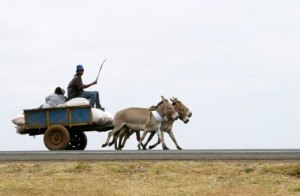 Peć is a large city populated mostly by ethnic Albanian Muslims … a legacy from the time of the Ottomans, dating back to 1455. However in 1967 a small minority of Slavic Serbian Christians … remnants of Constantine’s Roman Empire days … governed the city, an arrangement that led to tragic consequences.

It was like a scene from the Middle East with Palestinian kids throwing rocks at Israeli troops … except we weren’t troops, only simple tourists who immediately decided to skip the idea of “doing” Peć which seemed to want to do us! We agreed with the Bard who said, discretion is the better part of valor and hightailed it out of there as fast as our feet and my VW could carry us. 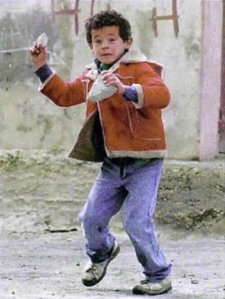 Getting ready for tourist season

That was the only unfriendly incident we’d encountered in our travels up to then, and it dramatically illustrated a greater problem, a titanic clash of civilizations … Christian versus Muslim. Those religions and the cultures they represent have jousted for well over a millennium now, and in 1999 uncounted masses of Peć’s citizens were slaughtered during an outbreak, and over eighty percent of its houses were destroyed or heavily damaged.

In retrospect I guess our Peć experience was a snapshot of something that’s just going to keep going on and on without an end in sight. And it sure should remind all of us of the futility of meddling in the Middle East … that vast ocean of ethnicities whose histories are filled with inherited hate that no outsider can hope to understand or cure.

And so we ran headlong from Peć, and in so doing ran straight into Zeitgeist!

Zeitgeist is a German linguistic trick word, a couple of syllables cobbled together that look innocuous enough, but cleverly and concisely capture a broad swath of the spectrum of human experience. It translates from the German literally as time-ghost, but carries a much broader, almost mystical meaning … as my traveling companions and I learned that afternoon in the mountains of Montenegro above the Adriatic.

I don’t know what exactly was the genesis of our experience, but after turning a corner somewhere in Montenegro, the Adriatic unexpectedly lay spread-out before us like a deep blue carpet lying over an undulating gelatin mass! 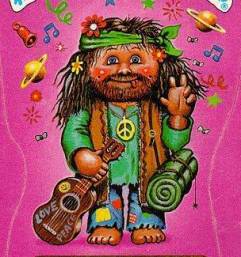 I can see the future, I can swim the seas, I can fly with the wind for I am a hippie!

That evoked a curious reaction in us, an exceedingly strange response … we got hit in the face with some kind of invisible happiness! We began to frolic! We started jumping. We hopped through a broad expanse of mountain meadow singing and spinning like complete fools. We even stuck flowers in our hair and danced like Dervishes while Martha sang lead!

None of us had ever displayed such unpredictably looney behavior. Something mysterious, some unseen affable force had taken control of our collective cerebral cortex, activating synapses of pleasure, making our limbs move jerkily, creating involuntarily happiness!

Even more surprising we were transformed into fledging hippies in that most unlikely of places at the precise moment the “summer of love” was blossoming in San Francisco and would soon capture imaginations around the globe … which I guess it already had considering that we were dancing like maniacs with flowers sprouting out of our heads in the wilds of Montenegro!

But that’s Zeitgeist for you. Good or bad it’s a widely discussed, little understood mystical force that will track you down and possess you … and when it does, get ready for a bout of sheer lunacy!

Coming next! Driving Around Europe Without A Map, Part 25 … I COULD HAVE SPIT ON HIS BALD HEAD

IF YOU DON’T WANT TO MISS ANY NEW POSTS, SIMPLY CLICK ON THE “FOLLOW” BUTTON ON THE RIGHT SIDE OF THIS PAGE. I HOPE YOU ENJOYED READING THIS. IF SO, WHY NOT SHARE IT WITH YOUR FRIENDS?

I hope you'll find my posts entertaining, occasionally edifying and worth whatever time you can spend with them ... Joe
View all posts by Joe Illing →
This entry was posted in Driving Around Europe Without A Map and tagged driving through Europe 1967, Kosovo 1967, on the road in 1967 Greece, on the road in 1967 Yugoslavia, Peć Kosovo, road stories, singing on the road, VW stories. Bookmark the permalink.

2 Responses to Driving Around Europe Without A Map, Part 24 … MAD MIDGET MUSLIMS AND A CLOSE ENCOUNTER WITH ZEITGEIST