Driving Around Europe Without A Map, Part 25 … A FAREWELL CONCERT BY THE WORLD’S GREATEST PIANIST 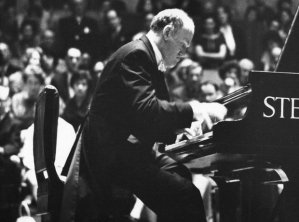 A lumberjack attacking a Steinway!

There he sat, right under my feet! I could have spit on his shiny, bald head … the legendary Sviatoslav Richter, the finest, sublimest pianist on the planet!

I could see his fingers rippling over the keyboard like water in a shallow creek. The melodies were hypnotic. The sound pure and clean, like echoes from an acoustically perfect cave.

On my right sat Maria, a handsome colleen from Dublin with Celtic fire in her eyes. On my left sat Martha, a California girl who sang so sweet she could turn Satan into a kitten.

We three, plus Stephen, sat with our folded arms supporting our chins on a railing through which we dangled our legs. The walkway upon which we sat circled the perimeter of the interior courtyard of an ornate, centuries old apartment building. Other aficionados sat similarly situated on every floor surrounding the courtyard, which was filled with VICs (Very Important Communists), television cameras and banks of bright lights.

Richter himself was the most unlikely of maestros. Sometimes he’d look like a diesel mechanic working on an engine. Other times you’d swear an angel was tap dancing on the keyboard. He had broad shoulders and a sturdy, lumberjack’s build … hardly the concert pianist courted by all the major symphonies and venues on the globe.

Above us a plump, gold moon slipped through in a slivery starlit sky. The weather was bug-free and summer-evening-perfect. 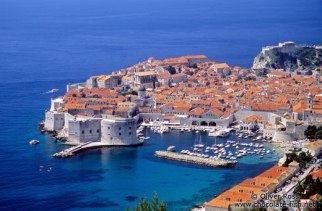 A city fit for a king … or perhaps a pirate!

The maestro sat before a grand piano the length of a limo. His performance was being broadcast live to fans across all eleven time zones of the old Soviet Union. The intense lighting produced tiny beads of sweat that glistened like a crown on his bald head.

We’d stumbled upon Richter and Dubrovnik, one of the Mediterranean area’s real prize jewels, totally by accident … quite a fortuitous accident!

Dubrovnik’s a remarkably well-preserved Medieval seaport and fortress. It’s in a spectacularly beautiful region called Dalmatia that’s attracted humankind since before the era of Diocletian, one of Rome’s greatest emperors. It was he who voluntarily stepped down from his throne of matchless power to grow cabbages near Dubrovnik.  If it weren’t for the not infrequent outbreak of wars and the occasional bouts of ethnic cleansing I’m sure it’d be a great place to live

Upon discovering ourselves in a perfectly preserved Medieval walled city we were, to say the least, surprised … but when I saw the poster advertising the Richter performance, that surprise turned into astonishment.

I thought about my good fortune that night as The Man played for us. I thought of driving through Macedonia and the village party that left us sleeping with cows in the rocky pasture. I remembered the crazed Muslims in Peć and the recent encounter with Zeitgeist in Montenegro. I looked back at the trail-with-no-destination I’d driven from the top of Europe to it southern extremities. I looked at my companions Martha, Maria and Stephen and knew memories of them would stay with me forever. 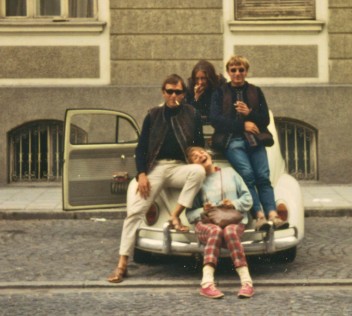 It’s all about the road and the people you meet along the way … goodbye Martha, Maria, Stephen and farewell my lovely VW

I silently thanked Jan in Kenilworth, Gun-Brit in Finland and Ingrid in Koblenz for the love we shared … and I wondered how far into Nepal Doug had wandered.

I thought back to Rigoletto in Russia, my blowout in Bologna and very nearly getting harvested in Italy. I thanked the good Lord that my trusty VW broke-down near a mechanic in Greece who fixed it for thirteen bucks.

I could still see that full moon cresting the snow-capped Alps in a night sky that sparkled with stars and far-away galaxies. I could still feel the warm wind combing my hair as I sped through southern Italy standing up, drinking wine from a bota bag and singing at the top of my lungs!

I thought, “You’ve been crazy lucky, like a man without an ounce of sense running on a California freeway at midnight! But then, maybe when you expect good things to happen, maybe if you believe it with an unquestioning faith like those nuns in Macedonia whose convictions have sustained them and their community for lifetimes of devotion, work and service … maybe you give good fortune a helping hand, and maybe, just maybe, that makes good things come your way.”

Naturally I could never be sure of that, but I always figured, “It sure in hell couldn’t hurt!”

In so many ways I’ve found it the best way to journey through life. It never ceases to amaze me that it always seems to work, or perhaps it just seems that way when looking backwards. But I’m certain it works a whole lot more than it fails, and that’s an invaluable lifetime traveling companion to have tag along with you on the one trip we all must take without a map.

This is the concluding post of Driving Around Europe Without A Map … I hope you enjoyed the trip!

IF YOU DON’T WANT TO MISS ANY NEW POSTS, SIMPLY CLICK ON THE “FOLLOW” BUTTON ON THE RIGHT SIDE OF THIS PAGE. I HOPE YOU ENJOYED READING THIS. IF SO, WHY NOT SHARE IT WITH YOUR FRIENDS?