Berkeley, the Sixties and Me, Part 1 … BOISTEROUS, BLUE-COLLAR AND BALL-BUSTIN’

The slow-moving rocket sputtered past my left ear and exploded into a geyser of tear gas a few of yards in front of me.

“Welcome back to Berkeley” I thought as I stumbled through the billowing cloud.

I was running to escape a scene of complete chaos back on Telegraph Avenue. Its street lights had all been extinguished; cars, trucks, vans, busses, motorcycles, bikes, peddlers and pedestrians had been banished.

Tear gas spread like a thick San Francisco fog, completely enveloping the street and all its buildings. In this eerie setting outlines of cops in gas masks could be seen swinging long nightsticks chasing choking, zig-zagging students who, blinded by the gas, ran helter-skelter like rats trying to escape a sinking ship.

It was 1968 and my second go at Berkeley following several misbegotten get rich quick schemes and a hitch in the US Army. My freshman year had been in 1961 when, over-confident, undisciplined, unmotivated and harboring vague dreams of becoming a beat poet I entered a world for which I was singularly unprepared.

It was the perfect recipe for disaster.

Not ready for prime time!

With my good buddy Ray as my roommate, I moved into a rooming house called Durant Place. It was close to campus and, appropriately enough, on Durant Avenue. A highly emotional, divorced Italian lady ran the place, who, by the time we showed up, had had her fill of male college students and their shenanigans … which probably explained her intemperate rages and frequent absences.

Our Place-mates, numbering a couple of dozen, were a mixed bag of freshmen, sophomores, upper-class men and a few grad students.

There was the clever, nerdy electrical engineer who rigged Ma Bell’s pay phones in the halls (one each per floor, three in total … long before the ubiquitous cell phones of today) so that the nickels, dimes and quarters rolled into them rolled straight out of them and into their coin return bins. This made the fellow extremely popular, particularly among those with family or friends on the East Coast.

The ex-Air Force Officer who studied law at Boalt was either constantly reading case law or spit-shining his black oxfords … he said it calmed him down, that it was a zen kind of thing. The Mexican from Texas who planned to become a physician, ended most of his keen observations of our cohort with the phrase “como la puta” … which he recommended we refrain from saying when in Spanish speaking areas.

Then there was the hermit whom none of us ever really got to know. He’d show up for meals during which he read and never talked. He wouldn’t shoot-the-bull or spend time doing anything other than study. He studied like his life depended on it. Mind you he carried a 4.0 point grade average … and this was long before grade inflation magically transformed C’s into A’s. 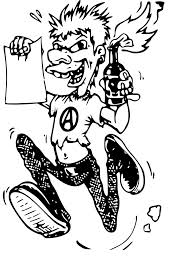 Peace, love and all that good stuff!

The hermit was regarded with something close to reverence by his Place-mates … though I always things a bit differently. I felt that after his first perfect freshman semester he’d probably trapped himself, and from that moment on he had to keep it up no matter what. And so, like Marley’s ghost, he haunted our halls silently dragging his metaphorical chains, each link forged to resemble the letter “A.”  To me it seemed too high price to pay for a letter … much too high!

Then there was the body builder, dubbed the Man Mountain. He was a bit of an anomaly. After his first semester he realized he really didn’t fit-in at Cal but toughed it out. And of course the handsome fellow who looked like he belonged in fraternity and was definitely out of place in Durant Place. He agreed and rushed into a frat house at his earliest opportunity.

The incredibly clever music major, Christopher, who had memorized every note of Beethoven’s 7th symphony in seventh grade as a tribute to the master, was a bit shy and yet quite sociable. He soon become like a brother to me and Ray.

This came as a disheartening discovery, one I assiduously did my very best to overcome.

DON’T MISS PART 2 OF “BERKELEY, THE SIXTIES AND ME” … SIMPLY CLICK THE “FOLLOW” BUTTON ON THE RIGHT SIDE OF THIS PAGE. I HOPE YOU ENJOYED READING THIS. IF SO, WHY NOT SHARE IT WITH YOUR FRIENDS?

I hope you'll find my posts entertaining, occasionally edifying and worth whatever time you can spend with them ... Joe
View all posts by Joe Illing →
This entry was posted in Berkeley, the Sixties and Me. Bookmark the permalink.

3 Responses to Berkeley, the Sixties and Me, Part 1 … BOISTEROUS, BLUE-COLLAR AND BALL-BUSTIN’