ON PRIVILEGE, WHITE OR OTHERWISE

I don’t know how much more of this white privilege I can take!

Lately I’ve been feeling guilty. In fact, I feel more and more guilty with every passing day. I think someday soon I’ll just pop with guilt.

It comes down to something I didn’t know I had … something called white privilege.

Apparently this malady is nothing new. It’s been around for quite some time. It’s something you inherit from your white parents and ancestors, which I guess makes them to blame (of course they’d have to have lived here in the US since there’s probably not too much white privilege in a place like China … though you’ve got to wonder how they’re coping with all their yellow privilege).

So I guess I could blame a guy like my great-grandfather George Washington May for passing on a big dose of white privilege. He fought with the Union Army during the Civil War and got so much privilege eradicating slavery it practically killed him!

Or I could point to my grandfather, Arthur Moses Dufresne. He grew-up on the tough docks in Chicago before that city had paved streets. He dropped out of school after eighth grade, studied engineering by correspondence school at night, joined a union when that meant hospitalization or worse (his union card was #13) and had a long, successful career with the Union Pacific Railroad when railroading was a hard, hazardous lifestyle. And doing so he created so much white privilege for his kids it was almost tragic! 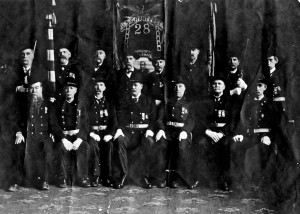 George Washington May, top left, who with his buddies passed on a mess of privileges to their kids, their kin and a whole bunch of slaves

Of course my father figures prominently on my list. When faced with seemingly insurmountable costs of my mother’s long-term, debilitating illness, he worked two full-time jobs … sixteen hours each and every day for decades. He paid those bills in full while, at the same time, giving me and my sister a solid middle-class upbringing.

Yep! Dad’s definitely got a lot to answer for!

But lately I’ve had some heretical thoughts about white privilege. Maybe they’re not zero-sum privileges, the kind you get by taking them away from someone else. Maybe they multiply and spread somehow.

For instance, what if boatloads of immigrants came here from somewhere like Vietnam? What if they worked hard, sacrificed, saved, studied, started businesses and bought property? What if they found success in the midst of white privilege and wanted to pass it on to their children?

What if white privilege suddenly jumped racial boundaries and mutated? What if it became yellow, red, black or brown … or maybe just plain old American privilege? And what if that happened in spite of all the preaching of those intelligent men and women who evangelize against it?

I know that’s a silly notion! It couldn’t happen! Why all those smart people couldn’t be wrong … they’re professors, politicians, media celebrities and the like! And they’re experienced! If any group of people in this entire nation has had to deal first-hand with the burdens of a life of privilege they have!

Why it’s almost enough to bring you to tears!

I hope you'll find my posts entertaining, occasionally edifying and worth whatever time you can spend with them ... Joe
View all posts by Joe Illing →
This entry was posted in Musings. Bookmark the permalink.