Berkeley, the Sixties and Me, Part 6 … UP ON THE ROOF WITH KARMA

Suddenly I realized I couldn’t breathe. Through the thick veil of smoke I could see firemen in astronaut-like suits and yellow hardhats running around tending to urgent chores. I could see their hoses twisted and tangled on the hall steps like monstrous snakes.

I stood there frozen. I hadn’t entertained the prospect of suffocating … but then I’d not given the matter a second of intelligent thought before running into that chaos to retrieve Ray’s prized stereo, which was why I stood facing death with a Warfedale hi-fi speaker under one arm and a Gerrard turntable under the other looking like a clueless character out of a play by Samuel Beckett!

Ray stood across the room from me with the other Warfedale speaker and a treasured McIntosh stereo amp under his arms looking like a looter trying to outwit some cops when we heard sharp, piercing beeps coming from the hall.

“That’s my oxygen tank warning me that it’s almost empty!” yelled a voice coming from a fireman with a light strapped to his helmut. As he turned towards us a beam of light shot into the smoke like a lighthouse piercing heavy fog.

Maybe, or maybe not … I’m agnostic about it. But, if it wasn’t karma, it had to be a close cousin … some kind of spiritual wave rolling through the ether, tossing us about like meaningless flotsam and jetsam, and by doing so somehow keeping the entire universe in balance.

There’s no escaping me!

Of course that tossing about can work both ways. It penalizes some, rewards others. This one hung a big smile from both ears of the Durant Place’s new owner. It was a sure sign that our metaphysical account with him was getting straightened out, and with it, hopefully, his impending lawsuit against us for warping his second floor during our historic, but ruinous water-fight of a month or so earlier.

This karmic deliverance all began up on the roof, to which there was easy access through a fire escape. It was kind of our private retreat, a great place to hang out … a place to recline in good weather, to read, to have a smoke, to dream or to simply enjoy watching puffs of cloud glide by in a vast silent void above you while under your out-splayed toes a noisy urban cacophony resonated.

And, as you might suspect, during those first heady years free from parental supervision, and for a brief spell unburdened by the bothersome necessities of life, I spent hours on the roof thinking noble thoughts and concocting harebrained romantic notions while I drank with buddies who were similarly situated and equally engaged in their own philosophical explorations.

The roof was a great place … a kind of oasis. You could get away from everything, or debate, or speculate, or RF, or drink … which endeavor inevitably lead to unending choruses of that wonderful classic from the Cal Song Book: the California Drinking Song (the lyrics of which, as we sang them, can be found following this post). It’s one of those songs that, when you start, you can never stop singing it. Kind of like A Hundred Bottles of Beer … except much better!

But who would’ve thought that this refuge, this oasis, this rooftop would become a birthplace of karmic payback! 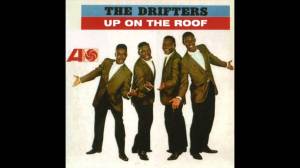 They made their career up on the roof

According to the Fire Marshal’s report someone must have flipped a cigarette from the roof that fell short of clearing the roof, landed in an old wooden gutter and smoldered until the moment of ignition when smoke began to billow from the roof’s eaves like soap suds overflowing in a washing machine.

The Hermit first noticed the problem, and passed yet another test with a perfect grade … he started ringing the second floor buzzer non-stop, our signal for existential emergencies.

When he first heard it Ray thought the buzzing was a RF in very poor taste … after all Spring finals had just begun! But then he spotted the Hermit pressing the buzzer!

“Good God! It’s got to be real!” he thought and burst into our room like the place was on fire … which it was!

We ran downstairs and into the parking lot where, surrounded by fellow boarders, we stood helplessly watching the roof that by that time looked like a rocket at Cape Canaveral was getting ready for take-off.

We could hear the far off sound of sirens approaching when it occurred to me that perhaps our retreat had been a bit hasty. Perhaps we should have grabbed a few things before we ran out … valuable things, like our books, our homework, our clothes and … “Oh Hell! Ray’s stereo!”

He spun and looked at me like Buddha at his moment of enlightenment. Without another word we both shot up the stairs, bounding several at a time, ran in our room, ripped the speakers, amp and turntable from their wires … and found ourselves staring at each other suffocating!

What a revolting development! Like a drowning man going down for the third time I leaped past the fireman with the beeping oxygen tank, jumped over the tangled hoses and threw myself out of the entry door with Ray on my heels!

Applause! Cheering! Adulation! We had an audience thousands-strong hootin’ and hollerin’ for us!

We exchanged glances and, with big grins we straightened up and thanked our new fans … the literally thousands of students from the dorms just up the street who’d all been studying for finals and found the Durant Place disaster a fascinating diversion with trucks, flashing lights and firemen running around with hoses and axes and ladders … not to mention a couple of complete idiots strutting down the building’s front steps carrying stereo equipment under their arms!

I can’t definitively say that karma had a hand all of this, but I can tell you I’ve never seen a happier man than the new owner of the Place … for following the fire his insurance paid for all repairs, including replacement of the warped second floor!

I guess that’s what karma’s all about … and why so many of us believe in it!

Now they had a little party down in Newport

Now they had a little party in the place

Now they had a little party down in Newport

And they had to carry Harry from the place

Now they had to carry Harry to the ferry

Now they had to carry Harry to the shore

Was that Harry couldn’t carry anymore

The hills send back the cry

We’re out to do or die

We’ll win the game or know the reason why!

And drink to California till we wobble in our shoes

Drunk the night before

Gonna get drunk tonight like I’ve never been drunk before

For I am a member of the Strauss family

Oh the Strauss is the best family

That ever came over from old Germany

There’s the highland Dutch and the lowland Dutch

The Rotterdam Dutch and the Irish

One keg of beer for the four of us

‘Cause one of us could drink it all alone damn near!

Here’s to the Irish, dead drunk!

DON’T MISS PART 7 OF “BERKELEY, THE SIXTIES AND ME” … SIMPLY CLICK THE “FOLLOW” BUTTON ON THE RIGHT SIDE OF THIS PAGE. I HOPE YOU ENJOYED READING THIS. IF SO, WHY NOT SHARE IT WITH YOUR FRIENDS?