Berkeley, the Sixties and Me, Part 10 … VIVE LA RÉVOLUTION!

Trouble was headed our way!

I knew how to plan for trouble. After all, I was trained to face trouble by the US Army.

I could find the military crest of a hill. I could move quietly through darkness to silently kill. I could recite the army’s motto … “If it’s a fair fight, split!” I could assess the strengths and weaknesses of opposing forces. I could understand how logistics determine tactics. And I could plan … without fail …  for a strategic retreat, if ever needed.

It was May 1968 and I was back in Berkeley. I’d taken a long detour involving get rich quick schemes, live-in-Europe dreams and an army hitch among other things, not to mention various romantic flings. In other words, I’d had a ball … after which my generous Uncle Sam offered to foot most of the bill for the three years of school I needed in order to matriculate.

It sounded too good to be true … but it was true!

I’d grown-up close to Berkeley on the tough streets of a navy town, Vallejo; I’d seen race riots; I’d been angrily mistaken for a hippy, a Goldwater conservative, a racist, a Maoist, a civil rights activist and an anarchist; I’d been pursued by a muslim mob in Bosnia; I’d been called a dud, a dude, a deviant, a disaster and an anti-nuke protester!

I’d seen plenty, been everywhere I’d wanted to go, and by the time I reached May of ’68 I figured I could spot trouble when and where I saw it … and I saw it coming in Berkeley! You could smell it in the air and you could hear it in echoes from the streets of Paris where tens of thousands of students were rioting. 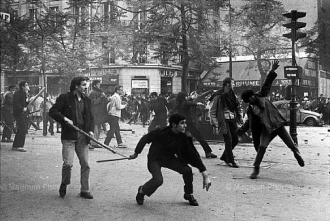 These latter day Bastille-style revolutionaries were busy constructing barricades, tearing up cobblestones and hurling them at legions of gendarmes! They were in open rebellion against their government’s imperious politicians led by their nation’s larger-than-life hero of World War II, the nation’s twentieth century icon, Charles de Gaulle.

Masses of students and malcontents squeezed and funneled through the streets of Paris like colonies of bacteria! They were taking and holding territory, they were occupying factories and they were taking-over university offices … all the while chanting “Down with capitalism! Down with consumerism! Down with class discrimination! Up with student funding!”

These Parisian partisans were brim-full of that same passion that fired their predecessors a mere two life-spans earlier, the ones whose guillotines fed the city’s storm sewers a river of Royal Blood.

Thousands upon thousands of these latter day insurrectionists swept through the streets of Paris like a plague of biblical dimension … and in no time at all they swept deGaulle and company clean out of the country! (I suppose you’d have to call it a pyrrhic victory … the government called for new elections nationwide, which quelled the violence, and six months later elected deGaulle who came back with more power than ever. As they say, “c‘est la vie.”)

This cyclonic insurgency swept halfway round the world and swept up a veritable army of romantics with it before finding permanent residence at the University of California in Berkeley.

The beginning of something big?

This followed the infamous Free Speech days, and gave all of that movement’s pamphleteers, underground newspapers and poster printers another chance to go completely berserk!

Radicals went into orgasmic tizzies … the Revolution had actually begun! The city’s socialist elite, its revolutionary chic, its bohemian beats, its high-minded merchants and its sanctimonious hangers-on all started singing the Marseillaise in perfect harmony!

Students were both curious, enamored and naturally sympathetic with their Gallic cohort. They were eager to join them in order to do something, anything, to tackle the evils of capitalism, consumerism and class or color discrimination.

Trouble was, not everybody agreed, including most of the state that lay outside Berkeley, as well as most of the police and government officials within it.

When the trouble finally came, it arrived during a rally designed to show support for the Parisian anti-capitalist revolutionaries. When several thousand students and rabble-rousers spilled out through Sather Gate to jam the sidewalks along both sides of Telegraph Avenue to over-flowing the game was on … and I was ready for it!

I stood watching the drama in a press of Frenchie sympathizers standing in the small, covered patio of a Mediterranean restaurant fronting on Telegraph. I could see all of the action unfold before me, and should it get out of hand I had a strategic retreat mapped out. I’d simply scamper through the swinging doors, located immediately behind me, into the restaurant and safety! Simple! smart!

My drill sergeant would have been proud of me … had things worked out the way I thought they would. But fate had something different in store for me that day … something very different indeed.

DON’T MISS PART 11 OF “BERKELEY, THE SIXTIES AND ME” … SIMPLY CLICK THE “FOLLOW” BUTTON ON THE RIGHT SIDE OF THIS PAGE. I HOPE YOU ENJOYED READING THIS. IF SO, WHY NOT SHARE IT WITH YOUR FRIENDS?

I hope you'll find my posts entertaining, occasionally edifying and worth whatever time you choose to spend with them ... Joe
View all posts by Joe Illing →
Gallery | This entry was posted in Berkeley, the Sixties and Me and tagged 1960s riots in Berkeley, Berkeley in the sixties, Berkeley riots, California in the sixties, UC Berkeley. Bookmark the permalink.

3 Responses to Berkeley, the Sixties and Me, Part 10 … VIVE LA RÉVOLUTION!