Berkeley, the Sixties and Me, Part 22 … A MOST UNEXPECTED REVOLUTION 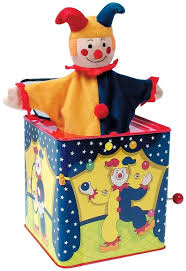 It was as if every bush hid a Jack-in-the-box!

I held her hand in a death-grip. Mike held her other as we sprinted down the driveway in a midnight’s darkness seeking refuge in a stranger’s back yard in order to hide like thieves from the squad of rampaging riot police. Her feet never touched the ground.

At the driveway’s end Mike cut left as I cut right and we very nearly split Barbra in half. We had a half-second to recover, thank God, and we made it to some bushes by an old back-alley garage. As we hunkered down burrowing into a man-sized bush, the cops started thrashing the shrubs, flowers and tomato plants with their nightsticks like medieval serfs with harvesting scythes.

We heard a yelp. A billy club landed a direct blow a couple of bushes over. Someone jumped up yelling followed by what looked like a garden filled with Jack-in-the-Boxes, the Jacks of which sprung up instantaneously from behind what seemed like every bush in the garden … everyone sprinting for dear life back up the driveway!

The cops beating the bushes were California Highway Patrol officers. They’d come to Berkeley to join hundreds of vastly outnumbered colleagues from neighboring communities who were overwhelmed in their efforts to restore law and order to the streets of that beleaguered city.

Earlier that day tens of thousands of outraged students and citizens had marched in defiance of dictates from the university and municipal authorities resulting in confusion, conflict and chaos. 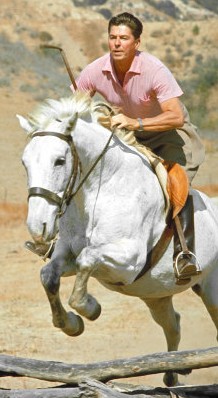 It was a gigantic board game played on the streets of the city. Cop cruisers would speed through the streets seeking congregations of protesters, no matter the size and skid to a stop. Four cops, adrenaline pumping, would jump out running after the students with their big clubs … and you’d better get the hell out of their way pronto!

Everyone knew this couldn’t go on. Something would have to be done … and somebody would have to do something pretty dramatic to put a lid on it. That somebody was a political newcomer, a Hollywood star by the name of Ronald Reagan.

Reagan was hardly fit the profile of a revolutionary … but his showdown with the elders of the faculty and administration of the university then served as the foundational event in what historians now call The Reagan Revolution.

Of course it’s replete with irony that the revolution casting the longest shadow on the future of the nation turned out to be that of the man who symbolized all that the young Berkeley revolutionaries detested and fought against. But love him or loathe him, he had that one, single indispensable ingredient shared by all makers of history … guts! And he needed plenty of those when dealing with the mobs in Berkeley.

Even the most fervid supporters of the student protests saw that the place had descended into chaos. What began as a show of sympathy for French students rioting in the cobbled streets of Paris had escalated to complete bedlam.

Students, activists and a whole lot of hangers-on were now itching to rumble with cops whom they called pigs. It all came to a head when some students tried to convert university owned property to the public’s use, christening it “People’s Park.”

When the university asserted its rights to the parcel, tens of thousands of protestors took to the streets. They weren’t used to rejection and they went ballistic. A riot followed a peaceful parade featuring a myriad of costumed characters, topless gals galore and one fellow who hopped the entire route inside a replica of a circumcised penis. 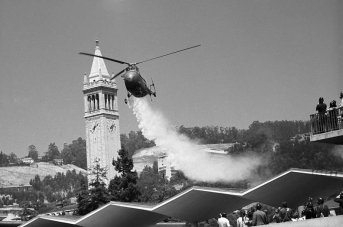 That riot resulted in injury to many … and death to a young man, James Rector. Things had gotten completely out of hand, and had become far bigger than the school and city police could deal with. Confronted with this Berkeley’s governing authorities called for state aid and Reagan mobilized thousands of California National Guardsmen to put down the nascent student “revolution.”

Those days of the occupation, which essentially closed the campus and lasted through graduation in 1970, (the university finally conducted our grad ceremony 20 years later in 1990) presented unique problems for us students. Classes were held in professor’s homes, outdoors by Strawberry Creek or in Faculty Glade, in meeting rooms around town and in church cellars. One day an army helicopter flew low overhead spewing military grade tear gas on me and a bunch of protesters I’d passed by in front of Sprout Hall. Another day I was very nearly bayonetted by a young, nervous guardsman when I ducked past him to on my way to get a sandwich.

It was during all of this tumult that I met a fellow who was to set off a change of events that resulted in my decision to make a dramatic career move … really dramatic! I decided to leave the country!

DON’T MISS PART 23 OF “BERKELEY, THE SIXTIES AND ME” … SIMPLY CLICK “FOLLOW” AT THE UPPER RIGHT OF THIS PAGE. I HOPE YOU ENJOYED READING THIS. IF SO, WHY NOT SHARE IT WITH YOUR FRIENDS?

I hope you'll find my posts entertaining, occasionally edifying and worth whatever time you choose to spend with them ... Joe
View all posts by Joe Illing →
Gallery | This entry was posted in Berkeley, the Sixties and Me and tagged Berkeley, Berkeley 1970, Berkeley in the sixties, California, California in the sixties, Peoples Park, Reagan and Berkeley, Ronald Reagan, the Reagan revolution, UC Berkeley. Bookmark the permalink.

1 Response to Berkeley, the Sixties and Me, Part 22 … A MOST UNEXPECTED REVOLUTION