Berkeley, the Sixties and Me, Part 23 … CANADA CALLS 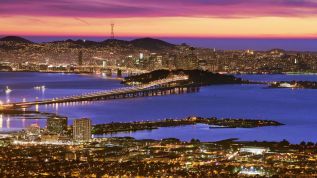 Stuart had a most impressive view!

He had a fabulous pad … a large apartment on the upper floor of a beautiful craftsman style apartment building on the north side of campus. It had lead-glass built-ins, a great kitchen, a small office area … but its single, incomparable feature was a wall of west-facing windows that offered a dazzling panoramic view of San Franciso Bay, the City, the bridges and the vast Pacific beyond.

The scenes of a lively port, the interplay of land and sea, the sun diving into the horizon were pure magic! However they were lost on Stuart! He never seemed to notice them. He kept his gaze on maps of British Columbia and Vancouver that covered nearly every square inch of wall space. I wouldn’t have been surprised if he’d taped maps right over those windows.

Stuart was working on his doctorate at Berkeley, which naturally that consumed most of his time, but when he took a break he’d imagine himself on one of those maps … a speck kayaking in Burrard Inlet’s choppy saltwater, or maybe skiing down glistening white Mount Seymour, or perhaps biking through lush green Stanley Park. 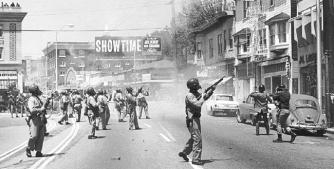 It was tough shopping on Telegraph Avenue back then!

“Vancouver has it all!” I concluded enthusiastically. “A big city with nothing around it but green and blue! Wow! That’s for me!”

Of course I asked some other students and a few assorted hippies about it before I made-up my mind, but everyone agreed … BC was the place to be! On top of which I wouldn’t be able to vote since, as an immigrant. Consequently I could justifiably ignore politics … a subject that was really getting on my nerves what with the National Guard occupying Berkeley’s campus and surrounding neighborhoods at the time and everybody accusing everybody else of some political shortcoming or other.

“Okay! The world’s falling apart! So what? You’ve still got to get on with your life!” I counseled myself, “you’ve simply got to get out of here! It’s time to head north to Canada!” 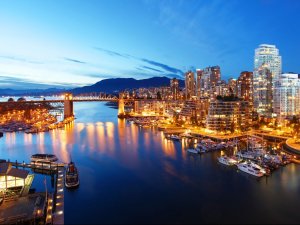 Vancouver has a certain charm about it

It all sounded easy enough. I’d earn some money over the summer, rent a trailer and drive to Vancouver … nothing to it! However there was a bit more to it than that for, in response to the immigration application form’s query regarding “vocation,” I made the mistake of answering much too candidly.

“I’m not sure. I’ll see what’s available when I get to Vancouver, or I maybe I’ll pursue post-graduate studies. I’ll decide when I get settled in Vancouver.” That reply raised more than a few red flags with whomever in Ottawa reviewed my application. In fact, I’m certain the cubicled bureaucrat read no further than that before stamping my paperwork with a giant, red “NO FRIGGIN’ WAY!”

And that really I set my jaw. If I’d been less than one-hundred percent committed to emigrating to Canada this pushed me into 100%plus certainty! I was bound and determined to get there!

“Rejected! Bull! We’ll see about that!” I silently fumed as I rolled a blank piece of paper into the platen of my portable Royal typewriter. As I began to compose my formal response to the Canadian government’s ridiculous rejection of my application, I figured I had nothing to lose as addressed it to Pierre Trudeau, Prime Minister, Ottawa, Ontario, Canada.

DON’T MISS PART 24 OF “BERKELEY, THE SIXTIES AND ME” … SIMPLY CLICK “FOLLOW” AT THE UPPER RIGHT OF THIS PAGE. I HOPE YOU ENJOYED READING THIS. IF SO, WHY NOT SHARE IT WITH YOUR FRIENDS?

1 Response to Berkeley, the Sixties and Me, Part 23 … CANADA CALLS