Where’s “Uncle Walter” When We Need Him?

“If you once forfeit the confidence of your fellow citizens, you can never regain their respect and esteem.” Abraham Lincoln

“Well, I used to get news from NPR. Now all I get are their political opinions. Every story, regardless of its news content, seems to start with the reporter’s view as to whether the event helps or hurts the Democrats or the Republicans. The news itself is secondary, almost an afterthought.”

Thinking maybe he’d been converted from a lifelong commitment to the political left by Donald Trump, I asked him.

“But what?” I asked anxiously. 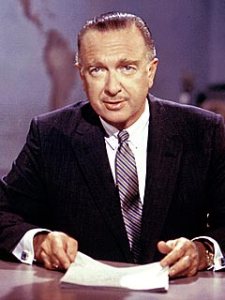 “It’s the bias of the media, on both sides of the political divide. It’s so transparent it’s nauseating,” he replied. “I long for the good old days of Walter Cronkite and the six o’clock news. I never knew if he was a Democrat or a Republican. He played it straight down the middle. I miss that … and I miss his honest, non-advocacy reporting. So now, in order to preserve my sanity, I listen to audio books during my commute.”

I had to wonder if NPR has lost this deeply committed liberal, how many others has it lost? I can only assume it’s a bunch and that my friend is a bit like the first rock rolling in an avalanche.

And I thought it all comes down to trust. We trusted Cronkite to give us the news straight, untainted by a polarizing political point of view. But no longer. The news reportage has become so tilted one way or the other that we can no longer fully trust any of it.

It’s a shame, and even a threat to our republic’s well being … but, unfortunately, as “Uncle Walter” used to say “that’s the way it is.”

3 Responses to Where’s “Uncle Walter” When We Need Him?